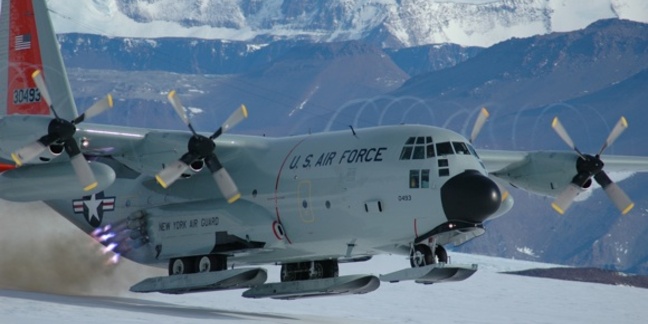 Geothermal heating from within the Earth's core – as opposed to the possibly warming air or sea – has been measured beneath the West Antarctic Ice Sheet for the first time ever.

And, we are told, it is "surprisingly high."

The West Antarctic sheet is the part of the Antarctic ice cap thought to be easiest to melt. Worries over global warming and sea-level rise lead to it being investigated much more than other parts of the frozen austral continent. Some parts of it, for instance the Pine Island Glacier, have appeared at times to be melting faster and faster, though it is not clear that this is due to global warming.

At other times, ice loss to the sea has appeared to slow right down.

Meanwhile all around the rest of Antarctica, the extent of sea ice has been growing not shrinking, such that there is nowadays much more Antarctic sea ice than there used to be - a circumstance which climate scientists admit has them stumped.

It's all a very confusing picture, then, and to make it worse nobody until now has had any idea how much heat might be reaching the possibly-troubled West Antarctic sheet not from the somewhat warmer seas and atmosphere, but from the rock beneath it.

That uncertainty has now been lessened somewhat, with instrumental readings from below the ice obtained and published at last in the journal Science Advances.

"It is important that we get this number right if we are going to make accurate predictions of how the West Antarctic ice sheet will behave in the future, how much it is melting, how quickly ice streams flow, and what the impact might be on sea level rise," says Professor Slawek Tulaczyk. "I waited for many years to see a directly measured value of geothermal flux from beneath this ice sheet."

Exactly what the new geothermal heating figures mean for the forecasts remains to be seen, but it is clear that the amount of geothermal heating is a good bit more than scientists had thought. Some of them are still hoping that it's a fluke result.

"We don't know how localized these warm geothermal conditions might be. This is a region where there is volcanic activity, so this measurement may be due to a local heat source in the crust," says Professor Andrew Fisher.

If it's not a fluke, however, it seems pretty plain that Fisher and his colleagues will have to revise their ideas as to how much of the West Antarctic melting is due to global warming and how much of it would be happening anyway due to warmth from the Earth's crust. ®

The "surprisingly high" quote is from the press release accompanying the new research, issued by Fisher and Tulaczyk's university, here.

There is much dispute over rates of melting in the Western Antarctic, with one recent study showing that today's rates are far from exceptional against the context of the last 2,000 years. Another showed similar results for the Peninsula sub-region, where melt worries are even more common than for West Antarctica in general.

Meanwhile the area of sea ice around Antarctica has reached record levels in recent times.

There are other areas of Antarctica which have big geothermal heat sources, in some cases – as Prof Fisher notes – local volcanic ones, others seemingly more widespread.