China wants to build a 200km-long undersea tunnel to America

And it'll take a whole day to get there. Sort of 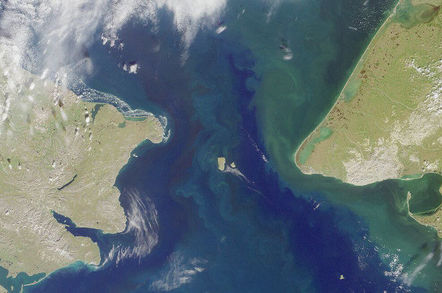 The Behring Strait. Russia is to the west, Alaska to the east

China likes trains. Its latest idea is to drive a railway route from Beijing to America via Russia, running under the Bering Strait to Alaska, Canada and America.

The 8,000 mile route would need two undersea tunnels; one running from Russia to the Big Diomede Island, and one from Little Diomede Island to America – well, Alaska. The three miles between the two islands could be crossed by a shorter third tunnel or a bridge.

This journey would take a day, as the international date line splits the islands, which are known as Tomorrow Island and Yesterday Isle.

Much like the Channel Tunnel, the scheme to link the East and West has been kicking around for a hundred years. Tsar Nicholas II thought it a good idea in 1905, and El Reg wrote about it in 2007, when we reported that Russia was more interested in links with China.

The new Chinese scheme provides both, giving China a land route to the US (and Canada) and Russia a route to both North America and China.

According to the Chinese website sina.cn.com, engineer Wang Meng-shu lays out a plan for a route from northeast China through the Bering Strait. It is reported that Wang Meng-shu said that his plan would have 200 kilometres of tunnels; albeit not contiguous, this is breathtakingly ambitious. China, however, claims to have the technology. The 8,000 mile route would reduce the need to fly, although at 350kph (220mph) it would still take two days.

China has a number of ambitions train projects in the pipeline. It is experimenting with a Hyperloop-style enclosed system which could, so it says, hit 1,800mph. ®

I've got a verbal govt contract for Hyperloop, claims His Muskiness

World+dog: Oh no you haven't!