Why the USS NetApp is a doomed ship 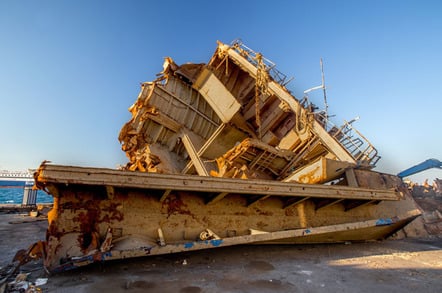 Comment NetApp last month changed chief executives, and in May laid off just over 500 people. Some believe this is the start of great new things and a turnaround for NetApp. I disagree.

To put this as bluntly as I can, NetApp is most likely doomed. Getting rid of the CEO won't save it.

NetApp's problem is that the culture of: "The answer is Ontap, now what was the question," pervades the entire company. Fixing NetApp would require a human resources brushfire to clear out the detritus and make way for orthogonal thinkers, something that NetApp has consistently proven it can't do.

NetApp made a great product, but that one product is all that they have, and in today's storage world there's really not a heck of a lot that's special about it anymore. NetApp solves the storage problems of last refresh cycle, and might be relevant for part of the next, but the company as a whole isn't doing anything substantial to address the fact that the compounded average growth rate (CAGR) of the storage array market is about to go negative.

Storage is changing. Has changed. Will change more. NetApp still stubbornly refuses to even entertain the notion that it needs to evolve and adapt to cope. It cannot accept this at an executive level nor a marketing or sales level. Most critically of all, the idea that change is required is not accepted at an engineering level. NetApp has one hammer and the world is nothing but nails.

Time for a terrible analogy

The USS Enterprise (CV-6) was the most decorated US vessel in World War II. As far as anyone alive in the US at the time was concerned, she served with distinction and quite literally saved entire nations. She helped save the world.

When the end of the war came, Enterprise was retired. A new generation of carriers was born. Bigger, more capable, more fit for the times.

Enterprise was honored when the first nuclear carrier USS Enterprise (CVN-65) was named after her. This new Enterprise also served with distinction, and she served the US for 50 years.

When people think of aircraft carrier lifespans, they often think of CVN-65 and think that this is normal, but CV-6 more than paid her dues in only nine years of service.

Think about this for a moment. The US Navy, at the end of World War II, battered, beaten, and with manufacturing capabilities we would consider laughable today retired a perfectly serviceable aircraft carrier after only nine years of service because they believed they had learned so many lessons from the war that entirely new designs were called for.

We're not talking about some code that runs on commodity hardware here, we're talking about an aircraft carrier. And not just any aircraft carrier either, but the hero vessel of the Second World War. Thrown away like so much garbage because the ROI in starting from scratch was that much higher.

Over the past 10 years the storage industry has fought a war. It has been brutal and miserable and it has driven innovation at breakneck pace. Storage has changed so much that all those fancy chargeable extras that make up enterprise-class data services are expected to be minimum table stakes. Hyperconvergence will be the new mainstream before the decade is out.

NetApp, EMC, storage administrators, and whomever else that wants to can rail against this if they so choose; it changes nothing. The war is over. Arrays lost. Ontap – like both ships named Enterprise – needs to be replaced with something more suited to the times.

The US is retiring its fleet of Nimitz-class carriers, replacing them with Gerald R. Ford-class carriers. One by one, the old ships will return home for the last time, and new vessels will project the USA's might to the world. In 2027 a new Enterprise, CVN-80, is expected to be launched.

Will NetApp still be around then to see it? If it is, will it still be a proud enterprise storage contender, or a zombie-like has been? Can NetApp think on those time scales, understand the value of R&D, controlled mutation of its corporate DNA, and the value of changes in technology?

These are the questions NetApp's new CEO must answer, and I do not envy him the task ahead. ®