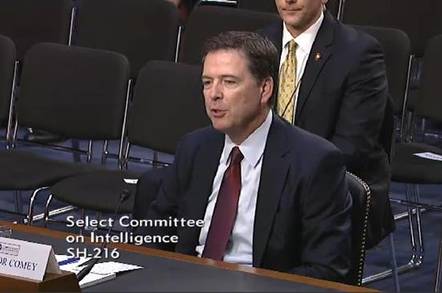 While we're about it, where's my flying car?

Senators on both sides of the political divide in the US support the idea of forcing American tech firms to cripple their encryption systems so that the cops and Feds can snoop on people at will.

On Wednesday, FBI director James Comey told both the Senate Judiciary Committee and the Senate Intelligence Committee how device file-system encryption and secure communications are apparently stopping the FBI and others from nailing ISIL, drug dealers, pedophiles, and other unsavory types.

He described the situation as communications "going dark" for law enforcement.

Comey said that there were firms that provided encrypted end-to-end communications and yet still had the ability to read such messages as they travel through their servers, but declined repeatedly to say who these companies were or how their systems worked.

He recounted that the FBI had encountered situations where they were thwarted by encryption, but couldn’t provide details on either the numbers of such cases or on what was being investigated. But he was clear that it wasn't up to him to sort out breakable encryption – that is Silicon Valley's job.

"I'm not here to scare folks, I don’t know the solution [to crackable encryption]," he told the Senate Intelligence Committee. "I'm not sure we've really tried to do this. We have the talent to think about this in a good way. Maybe it's too hard, but this country wasn't made up of people who said 'It can't be done'."

I have the greatest respect for mathematicians, but we need a national conversation about their claims about the division by zero problem.

On Tuesday the foremost names in the security industry published a paper explaining exactly why this was a bad idea. The paper was entered into evidence in today's hearings, and Comey said he'd read the executive summary and skimmed the rest, but insisted that American innovation could find a solution.

The need for movement on this matter was clear, he claimed. ISIL has over 21,000 Twitter followers and is using the social network to recruit people to kill here in the United States using encrypted communications and this must stop, he said.

Comey repeatedly said that the leaders of technology firms were "good people" but that they had a responsibility to help protect the public. He slammed Apple for adding encryption by default to the iPhone and claimed that the company was advertising the system as being proof against a warrant.

Senator Dianne Feinstein (D-CA) said that companies thwarting FBI investigations was extremely worrying and asked if technology firms should be required by law to report terrorist activity on their platforms. Comey said he wasn't an expert but that such a law could be useful.

"US companies, including in my home state, have an obligation to do everything they can to make sure their products are not used to feed the evil that ISIL generates," Feinstein said.

"I understand the need to protect records, but that doesn’t mean companies should configure services in a way that denies them the ability to respond to a court warrant. If companies won't voluntarily comply then they should be required to do so by legislation."

.@FSecureKEY uses end-to-end encryption. From the sounds of it, Senator Dianne Feinstein wants access to a “front door”. Doesn't exist.

Senator John McCain (R-AZ) agreed wholeheartedly. If ISIL is recruiting Americans to carry out domestic terrorism, then all means possible should be used to stop them and their evil machinations.

"More than a conversation is needed, action is needed," he said. "Over time the ability for us to respond is diminished while the threat to us grows."

Under questioning Comey admitted that even if the US did pass laws allowing law enforcement access to encrypted information, there were still plenty of tools produced outside of the US that would be untappable, saying "we'd have a heck of a time trying to do that."

Comey declined to say if selling borked crypto would put American companies at a disadvantage when trying to sell overseas. But he praised the UK in particular for laws forcing people, on pain of prison, to hand over encryption keys – although he seemed to think the UK's Regulation of Investigatory Powers Act (RIPA) was called DRIPPA.

I am pretty sure Taylor Swift knows more about encryption than FBI Director Comey.

This caused some surprise to Senator James Lankford (R-OK). "It's a rare moment for Europe to be ahead of us on anything," he remarked. [How's that GSM phone, AES encryption, or magstriped chip and PIN credit card working for you senator? – ed.]

Senator Ron Wyden (D-OR) took a more skeptical line with Director Comey. He pointed out that most of the growth in interest and demand for encryption had come after US government agencies "twisted the law" to carry out surveillance on its own citizens and that the "going dark" issue was a result of this.

"I think this is headed towards proposals for a stockpile of encryption keys being held by companies for the government to access," he said. "I am willing to work on the idea, but I think this is a big time loser. It's a loser on security, a retreat on privacy, and will do great damage to our technology industry; I hope we don’t go there."

On hearing this, Senator Feinstein, who had left her microphone on, leaned over and asked Wyden where he had heard of such a scheme. No answer was heard, but it's clear that some politicians are seriously considering asking Silicon Valley to do the impossible. ®