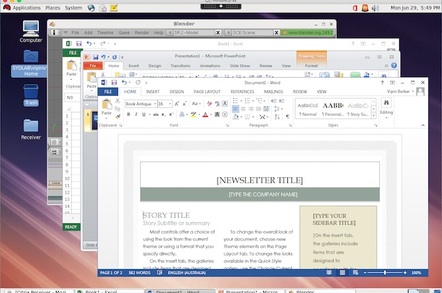 Citrix has made good on its April promise to deliver virtual Linux desktops, today announcing it's ready to roll out penguin-powered pretend PCs.

The company snuck the penguin-powered desktops into Feature Pack 2 for XenApp and XenDesktop 7.6. For now, Citrix says says you can choose from Red Hat Enterprise Linux 6.6 Workstation and Server, or SUSE Linux Enterprise Desktop and Server 11 Service Pack 3, the two distros the company says its customers have asked for the most.

Citrix is pitching virtual Linux desktops at a couple of markets, one of which is users of Windows apps. It's just as easy to pipe a Windows app into Citrix Receiver on Linux as it is Citrix Receiver on any other operating system. Users of “2D applications ranging from mission critical research and development environments for chip-design, high performance computing projects, financial and scientific modeling, big data analysis and engineering tools” are also welcome. Citrix also knows that vertical market customers who’ve invested in Linux apps, “particularly in oil and gas, manufacturing, digital media and entertainment industries,” are keen on Linux desktops.

VMware, which released its own virtual Linux desktops in June is going after similar markets, claiming its also fit for 3D duties.

Beyond the fact that Citrix and VMware have found virtual Linux represents a new battlefield, we now have two big enterprise IT concerns backing Linux desktops. Might that make 2016 the fabled Year of Linux On The Desktop?

Probably not, because desktop virtualisation remains a niche. But the pair's activities may well give penguinistas hope!

Citrix mouse is a hit