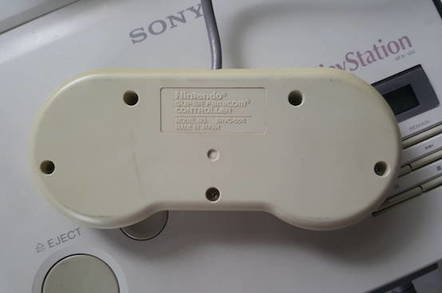 Vid A precious prototype of what appears to be a Nintendo-Sony Playstation has been paraded online, after the console was discovered languishing in a "box of junk".

Dan Diebold uploaded some pictures of the supposed SNES to imgur and said:

"My dad worked for a company, apparently one of the guys he used to work with, I think his name was Olaf, used to work at Nintendo and when my dad's company went bankrupt, my dad found it in a box of 'junk' he was supposed to throw out".

Diebold later shared the above poorly produced vid on YouTube in which he claimed it was "not fake, not made by some Russian dude".

Only a small number of the consoles were produced in the early Nineties, after Sony announced at the Consumer Electronics Show in 1991 that it had struck a video-gaming deal with Nintendo to develop a PlayStation.

However, Nintendo later reneged on that agreement, much to the chagrin of Sony, which went on to make its own console.

Some commentators on Reddit – where video gamers have wet their pants over the apparent gold dust find – suggested that the "Olaf" mentioned by Diebold could in fact be former Sony Interactive Entertainment boss Olaf Olafsson.

But then, don't get too excited gamers, the whole thing could still be an elaborate hoax. ®