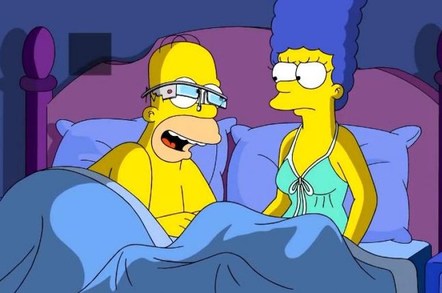 Marge: 'What fresh hell is this, Homie?'

Google has been quietly beavering away at a new Bluetooth-enabled product with the not-exactly discreet ID tag of A4R-GG1.

The "GG" in that name could point to a reworked version of Google Glass, as first noted by the Droid Life blog.

Details of the mysterious device were revealed in FCC filings that were published on 1 July.

The ad giant, in a "request for confidentiality" missive, asked the US communications watchdog not to disclose the following revealing information about the gadget – which has been labelled "BLUETOOTH & DTS/UNII a/b/g/n/ac":

Google also urged the commission not to publish the device's photos and user manual until 180 days after the FCC's grant date. Mountain View said in its letter (PDF):

It is our understanding that test measurement reports and correspondence during the certification review process cannot be granted confidential treatment, and such information will be available for public review once the grant of equipment authorisation is issued.

It's not clear – from the filings that have been made public – whether Google has been developing a new version of Google Glass.

Back in March, an uppity Eric Schmidt (Mountain View's chairman) said it was simply not true to suggest that the multinational's creepy techno-specs had been dumped just because it had shelved the Glass Explorer program at the start of this year.

"These things take time," he said in response to the negative gossip around Google's augmented reality glasses. ®