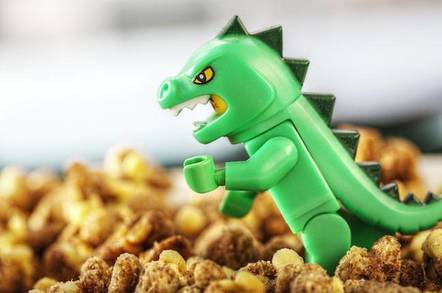 NTT execs said Thursday in London that the $112bn telecom and data giant would compete by offering public and private cloud, management, and data center services.

Motoo Tanaka, senior vice president of cloud services, said "Amazon is so overwhelmingly strong we are often asked how are we going to differentiate versus them.

NTT joined the OpenStack Foundation in May, pledging to use the open-source cloud architecture to strengthen its own public-cloud service. NTT is a hero among OpenStackers for being an early champion and adopter of their religion. In February, NTT announced Elastic Service Infrastucture (ESI), putting OpenStack on Juniper gear.

OpenStack forms the basis of NTT's Next-Generation Cloud Platform, due in December, which will allow NTT to set up and manage both shared and dedicated bare metal server network access.

NTT is underpinning this with an expanded global presence: the goal is for an "enterprise cloud footprint" in 16 locations and 13 countries – up from 13 and 10.

A great focus is outside Japan, where NTT is a household name, as NTT says it wants to cater to local data security and privacy concerns.

The company wants to buy existing data center providers where they provide assets NTT lacks – executives hinted at an impending acquisition in Indonesia. Deals will focus on growth areas such as data center services and cloud services, management said.

Yet, for all that, NTT's top brass on a rare visit to London Tuesday ruled out bowling a re-enforced OpenStack ball at the indomitable AWS skittle. New president and CEO Tetsuya Shoji said NTT would straddle customer needs in public cloud and private cloud, data center, network, and management services.

NTT claims that 80 per cent of Fortune 1000 are customers, with companies including OKI Data that hosted its SAP on the NTT cloud.

NTT is consigned with a bunch of other OpenStack flyers to the bottom-left, struggling to stand out and labeled niche players lacking both vision and an ability to execute in Gartner's fateful matrix. The company rates higher in network services, management hosting, and WAN for Asia Pacific.