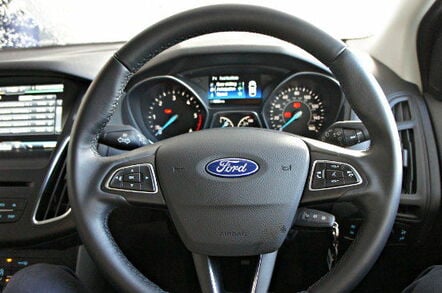 Ford is recalling 433,000 of its cars as they suffer from a software bug that could prevent drivers from turning off their engines.

The affected models include some 2015 Focus, C-MAX, and Escape vehicles. If you're unlucky, turning the ignition key to the off position and removing the key, or pressing the engine stop button, will not actually stop the engine, which will keep running thanks to a flaw in the body control module software.

In a statement handed out on Thursday, Ford said:

Ford Motor Company is issuing a safety compliance recall for approximately 433,000 vehicles in North America, including certain 2015 Focus, C-MAX and Escape vehicles, for an issue with the body control module. In these vehicles, it could be possible for the engine to continue to run after turning the ignition key to the "off" position and removing the key, or after pressing the Engine Start/Stop button. This is a compliance issue with FMVSS 114 regarding theft protection and rollaway prevention.

According to Ford, these are the vulnerable rides:

Of the at-risk motors, 374,781 are in the US, 52,180 in Canada, and 5,135 in Mexico. Owners should take their cars to their nearest dealer for a bug patch at no extra cost, we're told. Ford last hit the headlines when it revealed a gizmo to limit the car's speed depending on approaching traffic signs. There is no suggestion that waving a stop or one-way sign at your motor will fix this particular software bug. ®