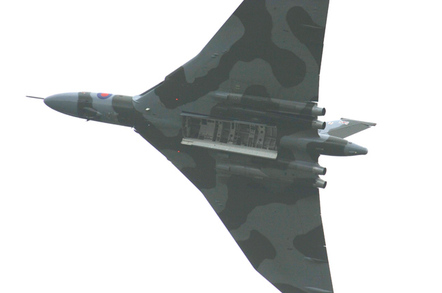 Visit a British air show before September and it's possible you’ll get the opportunity to witness the last Vulcan bomber in flight - and this is definitely the last year you'll get the chance, this time.

Alongside the staple leather-clad wing-walking ladies, the Battle of Britain Memorial Flight, simulated Apache attack-chopper scenarios and Red Arrows displays, you may find XH558 – now owned and flown by charity Vulcan to the Sky Trust, funded by charitable donations and Lottery cash.

The Vulcan holds a very special place in the hearts of many, not just for that unmistakable shape but because it functioned as a basic but wholly British nuclear deterrent early on in the Cold War.

Such was its frontline status and iconic image, the Vulcan was used by James Bond scriptwriters and given generous screen time in Thunderball (1965) – in which the V-bomber is hijacked by SPECTRE resulting in the loss of two nukes, which Commander Bond must then retrieve.

In the real world the Vulcan's only combat action came in 1982, as part of the Falklands War. The "Black Buck" raids in which Vulcans - supported by a large fleet of aerial tankers - travelled all the way from Ascension Island to attack the Falklands held the longest-distance combat bombing record for nine years until the USAF took the top spot with B-52 raids in the 1991 Gulf War.

Standing as I did at the Cosford Airshow – one of those last displays – just few hundred yards from XH558, with its engines running at full tilt, you knew it was something special. The ground shook and your stomach throbbed as this mighty aircraft passed overhead.

The US, wanting to keep all the nuclear toys for itself, passed the McMahon Act – officially the Atomic Energy Act of 1946 – forbidding the transfer of nuclear knowledge or technology to any country, even those former allies (Britain and Canada) that helped develop the bombs which had been dropped on Japan.

Britain was effectively left to come up with its own home-grown nuclear deterrent. In typical British fashion, we had the bombs delivered before the planes were ready. The bomb was the Blue Danube weapon of 1953. It was built in what could only be described as a Heath Robinson fashion, with its electrical systems powered by lead-acid batteries not dissimilar to the sort found in cars.

Blue Danube was thrown together in haste to produce a viable weapon. It weighed in as one of the largest weapons ever developed by the UK and such a huge bomb needed a huge aircraft to deliver it. The government put out a contract for a bomber capable of carrying such a large weapon – Operational Requirement OR.229 – which led to the development of four separate designs, in order to spread the risk and ensure that at least one was viable. Of these, three were later put into service: the Vulcan, the Vickers Valiant and the Handley Page Victor. These three nuclear-capable bombers became colloquially known as the V-force.

The Avro Company, of Lancaster fame, produced the Vulcan. Avro was owned by Hawker Siddeley, the firm created by Sir Thomas Sopwith who’d bought up Avro on the success of his earlier Hurricane and other fighters.

The end product was distinctive, huge and highly aerodynamic. It had a streamlined fuselage and swept-back, delta wings – nothing said "modern" in the immediate post-war world like a swept back or a delta wing. The wing-root held the jet intakes to further reduce drag plus there was a small, forward bubble for the cockpit that afforded a commanding view. Fuel storage was split between both wings and a central reservoir, with the ability to customise the bomb bay – also in the fuselage to reduce drag - for additional fuel storage. The tail contained a chute that could be deployed on landing to reduce the space needed. This lot was powered by four huge Rolls Royce Olympus engines and it packed a total punch of up to 21,000 lbs of ordnance.