Hide the HUD, say boffins, they're bad for driver safety

Cars are not the place for augmented reality 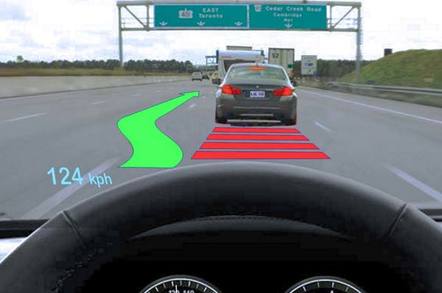 It looks likes such an obvious idea: turn car windscreens into head-up displays (HUDs), so drivers don't have to look away from the road to see (for example) the speedometer.

Except that it could be a bad idea, because it permanently divides a driver's attention between road and the popup information screens, say researchers from the University of Toronto.

The group, led by psychology professor Ian Spence, gave drivers a look at different screens in a driving sim, and found they can easily fall into a too-much-information situation in which “as a primary task becomes more demanding ... both tasks compete with and interfere with each other”.

Participants were first asked to report the number of spots arranged on a screen, and in some tests, a black square was put on the screen as a secondary stimulus.

People seeing only dots were good at accurately reporting the number of dots, the study finds, but the presence of the square was a real distraction.

With small numbers of spots, adding the square to the screen caused around a one-in-15 error rate, climbing to one-in-ten with large numbers of dots.

If the shape displayed with the dots was randomised (so it might be a square, diamond or triangle) and users asked to identify it, things got even worse. The interference between the two visual tasks, Spence said, slowed down judgement by “as much as 200 per cent”.

Another problem with the HUD, says Spence, is that alerts of different importance need different weightings on the display.

If you can't distinguish between “warnings of a collision and a recommendation to make a turn”, he says in the University's release, “competing warnings may be more dangerous than no warning at all.”

El Reg would note that an awful lot of money goes into developing HUDs for things like jet fighters, pilots are trained to use them – and a pilot is also taught when it's safe to ignore the view outside and concentrate on the instruments alone.

Drivers, and the HUD's they're being offered, are nowhere near as refined. The full study is at Plos, here. ®

Shock Land Rover Discovery: Sellers could meddle with connected cars if not unbound

Secondhand owners who didn't sell at JLR dealer can call us, says firm