Giant FLYING SPACE ROCKS could KILL US ALL, warns Brian May 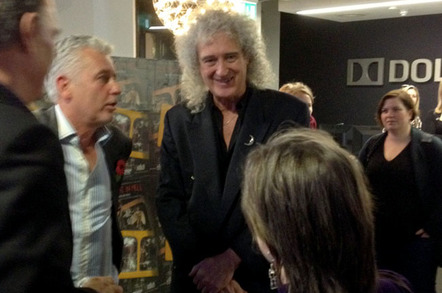 Among them are ex-Queen guitar man and astrophysicist Brian May and meedja celeb Brian Cox.

Asteroid Day accompanies a call for a 100-fold increase in the detection and monitoring of asteroids, called the 100x Declaration. The fear is that not enough is being done to catalogue and track near-Earth objects, known as NEOs.

Apollo 9 astronaut and Asteroid Day expert panel chair Rusty Schweickart reckons we are finding NEOs of 65 feet and bigger at a rate of 1,000 a year. It will take more than 1,000 years to find one million NEOs that potentially threaten the Earth, he reckons.

Those signing the 100x Declaration include the University of Manchester's Cox, former International Space Station commander Chris Hadfield, and Jill Tarter of the SETI Institute.

Asteroid Day is an international event that centres around the opening of a new IMAX film, 51 Degrees North, about the consequences of an asteroid strike on the Earth and the ramifications for humans.

Asteroid Day is the brainchild of May and others. May also provides the sound track to 51 Degrees North. June 30 was picked for Asteroid Day because it marks the anniversary of the Tunguska impact in Siberia, an explosion that laid waste to 800 square miles of forest. The rock that hit Siberia was thought to have been 120 ft across.

Besides flattening a lot of pine and silver birch trees, few – if any – humans were physically hurt.

Since then, however, there’s been the asteroid that burned up over Chelyabinsk, also in Russia, in February 2013. That was around 65ft across and it popped at 28 miles with the force of 500 kilotonnes of TNT. The shock wave injured 1,600 people and blew out windows.

You can read more about Asteroid Day here. ®