US police to throw big balls in criminals' faces 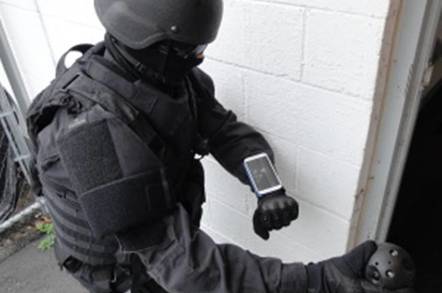 Video Next month, 100 US police departments will start deploying a new, ball-shaped camera that can be thrown into dangerous areas to scout out life-threatening situations.

The system, dubbed Explorer Tactical, is a camera contained in a rubberized ball the size of a grapefruit, with six recessed lenses feeding data into the system, coupled with 40W LEDs for lighting.

Software mates the six viewpoints into a panoramic view of the environment and feeds it back to an officer's smartphone via an internal Wi-Fi hotspot.

Key to the device is the image-stitching software used to take the feeds from the six lenses and merge them into something useful. The Explorer can build one full 360-degree panorama per second and the internal Wi-Fi can send this back to an Android or iOS device from 60 meters away.

Bounce Imaging CEO Francisco Aguilar says he got the idea for the device after hearing about the problems rescuers in the 2010 Haitian earthquake were having finding survivors in the rubble of ruined buildings. But after winning a prize for the invention, the firm was deluged with requests from police departments looking to use the device for crime fighting.

He told The Register that the Explorer was originally designed with a whole host of embedded sensors, including microphones, gas sensors for carbon monoxide and hydrogen cyanide, and other diagnostic hardware, but the police feedback was that little of this was needed.

"The thing we heard from officers was 'I am stressed out about a suspect with a gun around the corner and don't want to be messing around with options, I just want to see where they are,'" Aguilar said.

The device is powered by twin Lithium-ion batteries that give about 30 minutes of operating time. The ball has been designed to withstand rough treatment and can handle drops of up to seven meters without breaking.

It's not cheap, at $2,495 for the tactical version that uses a camera capable of seeing in near-infrared. But there's also a version with less sophisticated imaging systems that costs a thousand bucks less. Tests with police are ongoing, but Aguilar said development is continuing on the original concept for rescue work. ®