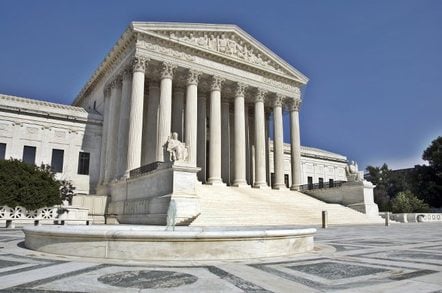 The US Supreme Court has declined to hear Google's appeal of Oracle's case against it in the matter of the Java API copyrights, leaving it up to a lower court to decide what - if any - damages Google owes.

Google was hoping the Supremes would weigh in on the issue of whether software APIs are copyrightable under current US intellectual property law, but no such luck.

As is typical of the top court, the justices gave no comment on why they declined Google's petition [PDF], other than to say that "Justice Alito took no part in the consideration or decision."

The court's judgment was not unexpected, however. In May, the Solicitor General, the Obama administration's top lawyer, weighed in on the matter at the Supreme Court's request, saying the law Google cited in its appeal was "not the appropriate statutory provision" to address the issue. The justices apparently agreed.

The decision sends the matter back to the US District Court, where a jury had earlier deadlocked on the issue of whether Google's infringement of Oracle's Java copyrights constituted "fair use." If it did, the Mountain View Chocolate Factory would likely owe no damages.

For a while it looked as though Oracle's copyright claim had been altogether rubbished – that was the opinion of Judge William Alsup of the US District Court of Northern California in 2012, at any rate – but the US Appeals Court overturned Judge Alsup's decision in May 2014.

Rather than squabble it out further, Google decided to go straight to the highest court in the land, in hopes of getting the whole thing quashed. Now those hopes have been dashed.

At issue is Google's Android operating system and its accompanying software development kit (SDK). Although Android doesn't use Oracle's Java Virtual Machine, its SDK is based on the Java language and it implements many APIs from the Java Class Library.

Oracle had argued that by aping the Java APIs, Google had violated Oracle-owned patents and copyrights. A jury cleared Google of patent infringement in 2012, but the copyright claim lives on.

The Supremes' decision to not hear arguments in the matter leaves it up to the lower court to decide how much to award Oracle of the "billions of dollars" it claims it is owed. In an earlier go-round, the two companies agreed on a nice, round figure – $0 – but that was likely out of expedience, so that the trial could proceed to its next phase.

The final outcome of the case could have far-reaching impact on the software industry, where the issue of the applicability of copyrights to computer code has been a matter of longstanding debate.

Asked for comment on the matter, a Google spokesperson told The Reg via email, "We will continue to defend the interoperability that has fostered innovation and competition in the software industry."

Oracle has not responded to a request for comment. ®