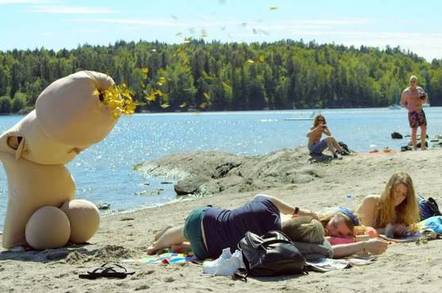 Glitter: We're not making it up. This is exactly what's happening

Under normal circumstances, creeping up on members of the public and emulating the sin of Onan upon their person would land you in jail. Unless it's for charity – which apparently makes it OK.

A 19-year-old claiming to work for a Norwegian sexual health charity has been raising awareness about chlamydia in the only obvious way: dressing up as a giant penis and spraying glitter over folk.

The video features the inexplicable tagline "Penis can surprise you" and shows student-prank style footage of the man harassing various Norwegians minding their own business. The reactions range from indifference to surprise and annoyance.

According to the charity almost 23,000 Norwegians contract chlamydia every year, but according to sex education charity RFSU, they are less likely to use a condom than their Nordic neighbours.

“I thought it was hilarious. If I can help others just by being a dick, there is nothing better,” the penis, AKA Philip van Eck, told Norway’s Tønsberg Blad newspaper. Lol.

Video of everything described above. Watch at your own peril

No spoilers! Norway won't tell Snowden if US will snatch him on a visit

Elon Musk's just a little bit too happy about this one, but his optimism is well-placed

No claps for you: Marketing director slams condom ad