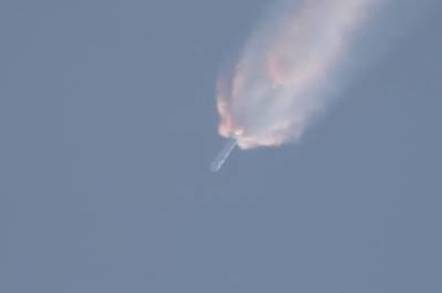 Updated Elon Musk's Falcon 9 rocket exploded after liftoff today over the blue skies of Cape Canaveral, Florida – the catastrophic failure happened within minutes of the launch.

The unmanned SpaceX rocket was carrying the Dragon capsule on its seventh planned mission to the International Space Station.

The pod had been loaded with supplies including Microsoft's Hololens headgear and food-making kit.

SpaceX was hoping to bring Falcon 9 back to Earth in one piece. However, the company lost contact with the rocket due to "some type of anomaly" and as a result the mission ended in failure.

The vehicle experienced an anomaly on ascent. Team is investigating. Updates to come.

Falcon 9 experienced a problem shortly before first stage shutdown. Will provide more info as soon as we review the data.

NASA, which plans to hold a press conference later today to discuss its contingency plan in the aftermath of the rocket's explosion, said it was unhappy that the CRS-7 mission had failed.

The US space agency's administrator Charles Bolden added in a statement:

We are disappointed in the loss of the latest SpaceX cargo resupply mission to the International Space Station.

However, the astronauts are safe aboard the station and have sufficient supplies for the next several months. We will work closely with SpaceX to understand what happened, fix the problem and return to flight.

The commercial cargo program was designed to accommodate loss of cargo vehicles. We will continue operation of the station in a safe and effective way as we continue to use it as our test bed for preparing for longer duration missions farther into the solar system.

"We will work with and support SpaceX to assess what happened, understand the specifics of the failure and correct it to move forward," he added.

"This is a reminder that spaceflight is an incredible challenge, but we learn from each success and each setback. Today's launch attempt will not deter us from our ambitious human spaceflight program.”

Musk tweeted: "There was an overpressure event in the upper stage liquid oxygen tank. Data suggests counterintuitive cause."

Now the post-mortem begins. There will be some restrained glee across the rocket biz (and even in some parts of NASA) following the explosion, as SpaceX had been set to cause massive turmoil with its much-lower launch costs and apparently very solid reliability. It may yet do that, but there's no denying that today's failure is a setback.

SpaceX is once again attempting to land its Falcon 9 rocket on an ocean barge, assuming it successfully blasts its Dragon capsule into orbit to resupply the ISS.

On track for launch tomorrow to @Space_Station. Liftoff targeted for 10:21am ET – watch live http://t.co/tdni5406Hi pic.twitter.com/VVNTVEUiVx

You can watch the video here, and The Register will be bringing you live updates.

It's been a smooth countdown to launch so far, apparently. ®