'Nah, they didn't even come close to each other' 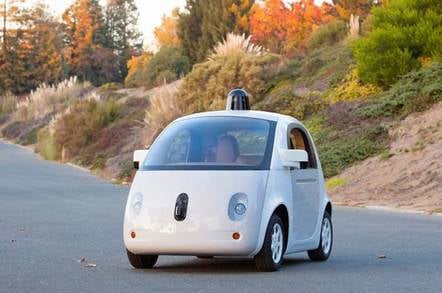 Delphi Automotive has contradicted a senior exec at the company by denying that one of its robo-cars had come close to being pranged by a Google self-driving vehicle.

A spokeswoman at the vendor has since claimed that "the vehicles didn't even come close to each other."

Absmeier had apparently told Reuters, which stands by its original story, that the prototype cars had been involved in a near miss.

He said, according to the report, that Google's Lexus RX400h had cut off Delphi's Audi Q5 SUV – the car Absmeier was travelling in as a passenger on San Atonia Road in Palo Alto, California at the time of the incident.

Delphi has now denied that a near-miss between the rival self-driving cars ever occurred. Its spokeswoman said:

During a recent visit with Reuters, our Delphi expert described an actual interaction that we encounter all the time in real-world driving situations.

In this case, it was a typical lane change manoeuvre. No vehicle was cut off and the vehicles didn't even come close to each other. Both automated vehicles did exactly what they were supposed to do.

However, Delphi admitted that the Google car did force its vehicle to terminate a lane change. But the firm's spokeswoman claimed that the cars were roughly a lane width apart at the time of the incident.

Google, meanwhile, told Reuters that the "two self-driving cars did what they were supposed to do in an ordinary everyday driving scenario."

Vulture Weekend suspects that Absmeier won't be wheeled out by Delphi to speak with other journos about its tech any time soon. ®