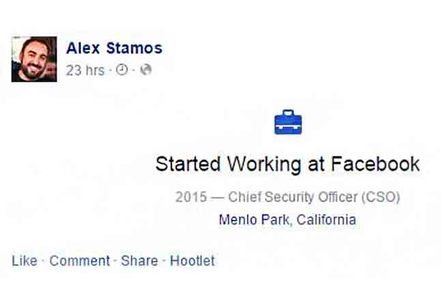 The hire means Menlo Park has filled a three-month vacancy left when security boss Joe Sullivan who oversaw a crackdown on Facebook scammers and scum left for Uber.

"There is no company in the world that is better positioned to tackle the challenges faced not only by today’s Internet users but for the remaining two thirds of humanity we have yet to connect," Stamos said.

"The Facebook security team has demonstrated a history of innovation as well as a unique willingness to share those innovations with the world, and we will build upon that history in the years to come.

"I had a wonderful time at Yahoo and learned that the Yahoo Paranoids truly live up to their legend. Their commitment, brilliance, drive and pioneering spirit made it a pleasure to roll up our sleeves and get to work."

The NSA muck-rucker, so known because he publicly challenged agency boss Mike Rogers to debate over the need for encryption back doors, will start work at Facebook on Monday.

He is credited among other Yahoo! security deeds including overseeing the roll out of end-to-end encryption, and support for TLS 1.2 and perfect forward secrecy. ®