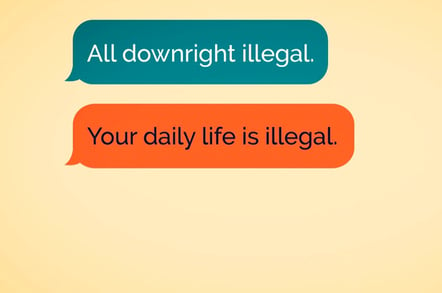 Teenaged* German MEP Julia Reda, who believes that “your life is illegal” because of copyright laws, has successfully conned a gullible newspaper into reporting that sharing your own photos will soon be illegal too.

The Telegraph’s skiing expert ran a story suggesting that British holidaymakers “may face legal action” for uploading photos of British landmarks onto Facebook.

Landmarks such as the London Eye would have to be blacked out, the paper reports: “Members of the public would only be able to upload the uncensored photograph with prior consent of the author… Brussels could extend this to the UK as early as next month.”

It would be shocking, indeed, if only it was true. But like most assertions based on statements made by Europe’s last remaining Pirate Party MEP, it isn’t.

The Telegraph seems to have based its story on Reda's own blog, which started with a claim that “Freedom of Panorama was under threat”. (Things are always “under threat” in Reda-land, and therefore need to be “saved”. Just like the Blue Whale needs to be saved, or the internet, for that matter. Freetards don’t seem to have any more metaphors in the cupboard beyond extinction and conservation.)

But what does this actually mean?

UK copyright law contains an exemption for buildings and works of art on display. The exemption allows you to take a photo of a public panorama, although museums will have their own restriction on images, just as Taylor Swift does at her concerts.

Most European countries also have such an exception, although France being France is one of the odd ones out. Earlier this year the European Parliament invited Reda to produce a report on copyright. She produced a very US-flavoured draft, which MEPs smothered in over 500 amendments.

One of these amendments was a reaction to Reda’s wish that the exception should be harmonised. No way, Parliament said – and fearing that owners would lose image rights of artistic works, it closed down the possible loophole.

Amendment 421 was passed, which “considers that the commercial use of photographs, video footage or other images of works which are permanently located in physical public places should always be subject to prior authorisation from the authors or any proxy acting for them”.

The amended Reda report that Parliament voted to approve has no legislative importance. The European Parliament cannot write laws: that’s the job of the European Commission. And the Commission won’t deliver its legislation until much later this year.

When Reda speculated “if this amendment became law, what would that mean in practice?” she presumably knew this. The chance to raise the alarm on a bogus pretext clearly couldn’t be resisted.

Of course, there is the possibility that MEP Reda doesn’t actually know that an MEP cannot write legislation, and that the report she’s just written isn’t actually legislation. But since Reda has been an MEP for over a year, we’ll give her the benefit of the doubt, and assume that someone has pointed this out to her.

Next page: If copyright hasn’t already made you mad, you will be after reading this
Page:
Tips and corrections
35 Comments

The Telegraph has killed Prince Philip

From aardvark to Bicholim, the encylopedia of things that never were

It's Wikipedia mythbuster time: 8 of the best on your 15th birthday