Courtney Love in the crossfire! Paris turns ugly over Uber

How will you stop us! Mmm, with baseball bats 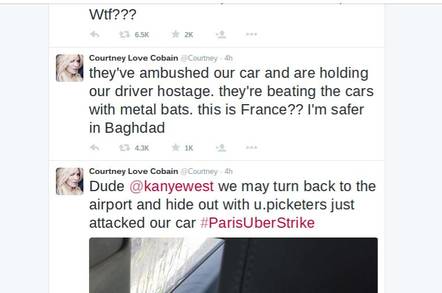 In a development many thought an impossibility, Paris has turned decidedly ugly, as traditional taxi drivers clashed with Uber, dragging pop singer and 1990s grunge leftover Courtney Love into the battle.

In protest against the ride-sharing app service Uberpop, taxi drivers brought the French capital to a standstill, in particular targeting areas around airports and train stations, as well as blocking the Périphérique ring-road.

The Uberpop app is illegal in France, but that hasn’t stopped the US corporate from operating. It claims it already has 400,000 Uberpop users in France in Bordeaux, Nice, Lille, Lyon, Toulouse and Paris.

Earlier this year, a French court upheld part of a recent transport law that bans companies from showing live locations of available cars that are not traditional taxis on a smartphone app.

The law, passed late last year, also requires cars that are not booked to go back to a garage or depot between trips.

Uber also operates a liveried taxi service and these easily identifiable cars have borne the brunt of taxi drivers’ anger — pop singer Courtney Love was in one such vehicle attacked on Thursday.

French Interior Minister Bernard Cazeneuve appealed for calm and said that France can't operate by the law of the jungle. But, while he urged taxi drivers not to take the law into their own hands, he also demanded that Parisian police authorities immediately put a stop to Uberpop activities.

Uber has filed a formal complaint against the French state with the European Commission, contesting that France is blocking its right to do business. ®