Deregulate! But let us keep all the hardware, of course 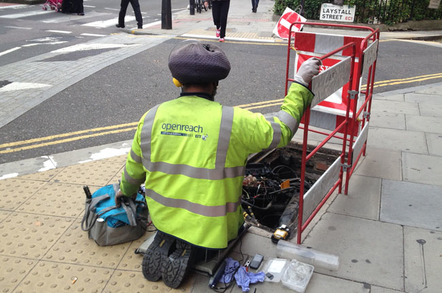 Is it a helmet? Is it a beret? Is it communism in disguise?

BT is asking Ofcom to be freed from its obligation to provide ordinary PSTN/POTS voice telephone connections across the UK. The telecoms giant would prefer to provide only internet services, and let customers use them for voice calls.

The Telegraph reported that BT wants to move "all domestic and business customers to internet-based voice calls within a decade," but is prevented from doing so by Ofcom, which requires it to offer basic PSTN/POTS voice connections alongside internet ones.

Expecting customers to eventually migrate to a portfolio of "all IP" services, including broadband, television, and voice, BT is upping the pressure on Ofcom in anticipation of its once-a-decade review, due later this year.

"BT believes all IP services will be used nationwide by 2025 and we think Ofcom's review is an opportunity to roll back obsolete rules in this area to create a level playing field," a BT spokesperson told The Register.

Regulation has not kept up with the massive growth in competition and rapid pace of technology change over the last decade, whilst there are many overlaps between British and European laws which could be removed and simplified.

Such measures would improve efficiency, stimulate competition, and encourage investment in the UK's connected future.

The regulatory issue is Condition 1 of the Universal Service Conditions [PDF] which specifically requires "connection to the public telephone network".

At the moment for most of the UK this means that BT's copper lines must have, at the exchange (or maybe cabinet) end, equipment which can receive and connect up a PSTN/POTS voice call from a user's old-school phone, as well as DSL gear for IP traffic. And BT must maintain suitable supporting PSTN systems as well. The telecoms monolith is the only UK telco required to do this under the Universal Service Obligation, except in the area around Hull, where the same requirement is placed on KC.

Such national-infrastructure tasks are carried out by BT's Openreach division, which is required by Ofcom to be managed separately from the rest of BT in order to allow competitors fair access to the UK telecoms market for both voice calls and internet. BT's competing telcos are currently pushing for Openreach to be completely separated from BT.

Apart from getting rid of PSTN/POTS, BT also told the Telegraph that it would like to make savings by integrating Openreach operations into data centres used by other parts of the corporation, something its competitors would doubtless view with extreme disquiet regardless of any undertakings by BT not to snoop.

One especially irksome feature of the PSTN/POTS Universal Service Obligation is that BT and Kingston are required to provide end-to-end connectivity – that is, they have to put calls through to other networks (for instance mobile ones). End-to-end connectivity is a hot issue with all telcos: they are generally compelled to provide it by regulators and frequently not permitted to charge each other and their customers as much as they would like to for handling each others' calls, texts etc.

All the telcos find it especially unfair that Over the Top (OTT) internet messaging and calling operations such as WhatsApp, Skype, Apple Facetime, Facebook etc are not required to connect their users to rival networks. All of them would like it if the OTT players faced more regulation, and they themselves faced less – though nobody except BT would relish the thought of a deregulated UK market with Openreach still under BT control.

The telcos may find they have to lobby the EU as well as Ofcom, however – and they may find that would-be OTT operators like Google are there ahead of them.

And if the regulators – British or EU – are on top of their jobs, they'll be well aware of the fact that quite a lot of people's copper line won't carry an internet connection capable of voice traffic with decent quality and reliability. Plenty more have a copper line that could carry such a connection, but don't have or want either a DSL modem or an IP phone. But they'd still like to be able to make and receive calls. ®

This being America, they weren't too hard on most of them

Let's make laptops from radium. How's that for planned obsolescence?

Something for the Weekend, Sir? Come on, guys, get a half-life