Microsoft releases free Office apps for half of all Android phones

Word, Excel, and PowerPoint up for grabs 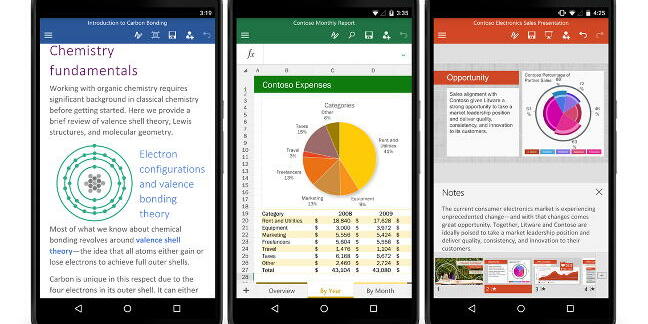 Redmond's plan to get its code running everywhere took another step forward on Wednesday when it released free versions of Microsoft Word, Excel, and PowerPoint for Android phones.

Ever since Satya Nadella took the top job at Microsoft he's been banging on about getting its software on every platform. iOS got it first, then Android fondleslabs, and in May Microsoft issued a preview for Word, Excel, and PowerPoint for Android phones. That program has now finished and the full code is available for download from the Google Play Store.

"We are so grateful to our preview users, and with their help we were able to test the apps on over 1,900 different Android phone models in 83 countries," said Kirk Koenigsbauer, corporate vice president for the Office 365 Client Apps and Services.

"During the preview, we heard from thousands of these users, and over the last few weeks we were able to incorporate a lot of their feedback into the apps we’re launching today. For example, we made it easier to connect to other popular third-party storage offerings like Google Drive and Box, as well as many usability adjustments to make it easier to navigate commands within the apps."

Only around half of Android users will be able to download the software, however: 51.6 per cent, to be exact. They need Android 4.4 or higher to work – only they won't work on the preview build of Android M – plus a gig of RAM, and you'd better make sure you've got enough space for the software as well.

Word for Android is a 104MB download and takes up 177MB when unpacked, not including documents and other data. The Excel download is 93.27MB and unpacks to 168MB, and PowerPoint downloads as 91.07MB and is 166MB when installed.

That said, you might not need to download the apps in the future. Microsoft says it has partnered with 30 OEMs to get them preloaded on smartphones, including those from LG, Samsung, and Sony.

The free versions of the apps support core functions, including file creation, editing, and sharing. Documents can be stored on OneDrive, but also Dropbox, Google Drive, or Box.

The new apps are available on the Google Play Store, but that doesn't operate in China - a massive market for Android users. Instead Microsoft has put the apps on Tencent, Baidu, Xiaomi, CMCC, and the Samsung Galaxy Store.

Office 365 subscribers, however, get some extra features, detailed here. ®