Two foreigners, a desert and a jeep full of bank statements

Armed guards at security checkpoints? Our reader has a plan 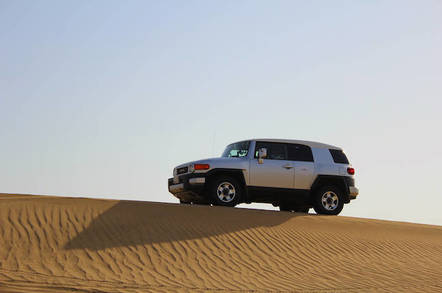 On-Call Welcome again to On-Call, our weekend regular in which we share readers' tales of odd things that happen at odd times in odd places.

This week, reader Alex tells us he once worked in the Saudi Arabian capital of Riyadh, for a major bank.

“There had been a bunch of problems, which meant the customer account statements were looking like they would be late,” he recalls. “This was not good.”

Making things worse was the fact that the mainframe which produced the statements was 400km away in a city called Dammam. Alex's job was administering Endevor, a z/OS code management tool. With him in Riyadh was the main programmer, who was trying to fix the statement-spewing application.

But the operator who was running jobs for the programmer was in Dammam.

This unwieldy arrangement meant “it was looking very much that we weren't going to get these statements produced, printed and back to head office in Riyadh in time for them to be posted out”. So Alex decided he and the programmer had to go to Dammam to sort things out.

“He looked at me slightly shocked as he considered the situation, then timidly agreed,” Alex recalls. “We took my Jeep and drove the 400km to Dammam, where the three of us worked frantically to get the statements produced and printed. Then we loaded them in the back of the Jeep, which was a lot of boxes of heavy paper, then drove the 400km back to Riyadh.”

None of the guards blinked, the pair made it back to head office in Riyadh with about 30 minutes to spare and the statements were posted out to customers at the normal time.

“It was just another of the many adventures that working in Saudi Arabia presented,” Alex says.

Have you had to go on whacky work-related road trips? Let me know by writing me a lovely email and you too could feature in a future On-Call. ®