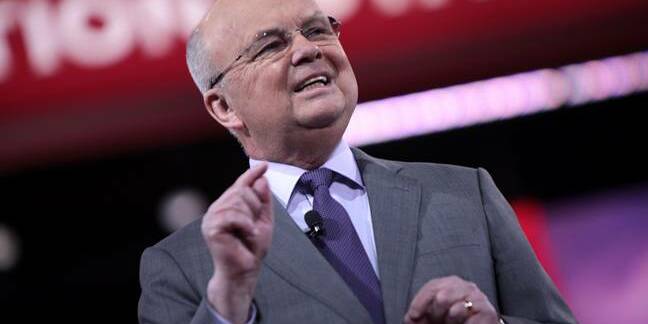 Former National Security Agency director Michael Hayden this week told a conference about how little fallout the NSA has suffered after the Snowden leaks, and detailed how his former agency would hack other governments.

He said to his audience at the Wall Street Journal's chief financial officer conference:

If somebody would come up to me and say 'Look, Hayden, here’s the thing: This Snowden thing is going to be a nightmare for you guys for about two years. And when we get all done with it, what you’re going to be required to do is that little 215 program about American telephony metadata – and by the way, you can still have access to it, but you got to go to the court and get access to it from the companies, rather than keep it to yourself,' I go: 'And this is it after two years? Cool!'

When asked if Snowden was working for a foreign power, Hayden replied that, thinking inductively as intelligence operatives are supposed to do, there was "no evidence" Snowden had defected.

On the other hand, Hayden added, if he thought about it deductively – as in Snowden is working for Russia and/or China, and how would one explain that – Hayden said he had his suspicions, but stressed that he wasn't a "deductive guy."

He was also asked about the hacking of the US Office of Personal Management. Sensitive databases held by the agency appeared to have been stolen by the People's Liberation Army Department Three (the Middle Kingdom's version of the NSA), he said, and the swiped dossiers on American citizens were "a legitimate foreign intelligence target."

"If I as director of CIA or NSA would have had the opportunity to grab the equivalent from the Chinese system, I would not have thought twice, I would not have asked permission, I'd have launched the Star Fleet and we'd have brought those suckers home at the speed of light," Hayden said.

"So this is not shame on China, this is shame on us. For not protecting that kind of information."

Hayden argued the stolen OPM databases, which apparently included US national security clearance application forms, would be useless for blackmail since Uncle Sam already knew what was on the forms. Instead it would be used for old-fashioned source grooming.

He explained that the way to use this was to build up intelligence dossiers on key people the Chinese government wanted to spy on. By knowing their home details, preferences, habits, and lifestyle, an agent could inveigle their way into the target's confidence, and glean useful information.