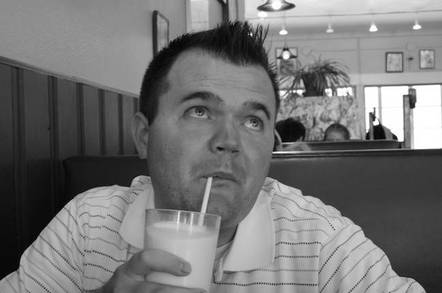 Perhaps you don't think that there's a massive and highly lucrative trade in human breast milk on the internet, much of the milk apparently being quaffed by adult men? Perhaps you need to pull your head out of the "real" world, get back online and get up to speed, my friend.

To be fair, we here on the Reg breasts-and-related-matters desk were also unaware of the colossal unregulated trade in lady-sourced refreshments until just now, when we happened to read a highly informative article in the hefty journal Breastfeeding Medicine. It is by a real doctor, and it is titled "The Ultimate Social Network: Breastmilk Sharing via the Internet".

The proliferation and commercial success of Web sites such as Only the Breast (www.onlythebreast.com), which has been called the “Craigslist of Breastmilk,” suggest that this activity is more widespread ... and is not limited to sharing, as opposed to selling ... breastmilk has become a commodity and ... is being touted as the “natural superfood” ... as a health food supplement for male body builders and athletes ... breastmilk's commercial value is being heralded as “liquid gold” in non–health-related Web sites such as Penny Hoarder (www.the pennyhoarder.com), whose motivation is to educate mothers how to “make extra cash” from their precious body liquid ...

The unregulated widespread commercially driven practice of milk sharing/selling has led to a rash of documented risky practices ... including transport of milk in unrefrigerated and not securely sealed receptacles and bacterial contamination of the milk. In addition, there have been reports of Internet-purchased breastmilk being diluted with bovine milk ...

This is plainly the latest runaway internet supertrend, with breast milk set to take the place of essentially worthless traditional online currencies such as bitcoins, web-2.0 content, ad clicks, selfies, amateur pornography, cat vids, merciless foreign brides and the rest. It's goodbye Facebook, Craiglist, eBay and all those old dinosaurs, and hello to the faster, newer competitors of onlythebreast.com which are now sure to spring into being. Doubtless they will be proper sharing economy app-based offerings rather than oldschool websites - a dozen names ending in "r" spring to mind.

All hail the new milkshare-based internet. Read all about it courtesy of Breastfeeding Medicine here. ®