Version 0.1 super-stars built the universe – and they lived all the way over there, boffins point 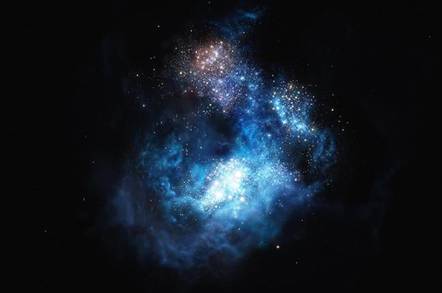 In a galaxy far, far away ... the CR7 stellar swarm

Pic Astronomers have recorded the brightest galaxy yet seen in the universe. It was formed 800 million years after the Big Bang, and has evidence of an until-now theoretical type of star.

The galaxy, dubbed Cosmos Redshift 7 aka CR7, is three times brighter than anything astronomers have seen so far, but the distances involved mean that it took the combined efforts of the Hubble Space Telescope, and the Earth-bound Keck Observatory, the ESO Very Large Telescope, and Japanese-run Subaru Telescope, to spot it.

But what's inside CR7 is what's really excited scientists. Research accepted for publication in The Astrophysics Journal claims the galaxy contains a type of early star that has long been hypothesized but never seen: a Population III star.

"It doesn't really get any more exciting than this," said David Sobral from the Institute of Astrophysics and Space Sciences.

"The discovery challenged our expectations from the start as we didn't expect to find such a bright galaxy. Then, by unveiling the nature of CR7 piece by piece, we understood that not only had we found by far the most luminous distant galaxy, but also started to realize that it had every single characteristic expected of Population III stars."

Population I stars are all around us, indeed the Sun that powers our planet is one. They contain a significant amount of complex metals and chemicals formed by nucleosynthesis in the hearts of other stars long since gone nova. Population II stars are similar, but contain much less metal.

In the 1970s, scientists predicted the existence of Population III stars, formed in the very earliest stages of the universe. These would be built almost entirely from hydrogen and helium, with maybe trace amounts of lithium and beryllium.

Such stars would be enormous – thousands of times larger than our Sun – and would be much brighter than most other stars, and last a comparatively brief few million years before burning out. CR7 looks to have a cluster of such stars lighting up its core, with spectrometers finding nothing heavier than helium emanating from the galaxy.

"I have always wondered where we come from," said Jorryt Matthee, second author of the paper.

"Even as a child I wanted to know where the elements come from: the calcium in my bones, the carbon in my muscles, the iron in my blood. I found out that these were first formed at the very beginning of the Universe, by the first generation of stars. With this discovery, remarkably, we are starting to actually see such objects for the first time." ®