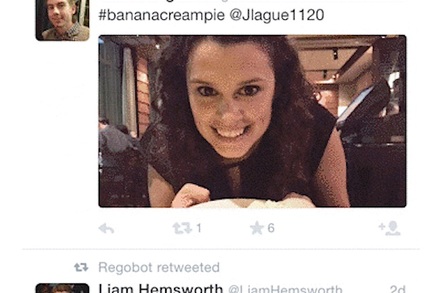 The San Francisco-headquartered post-profit upstart is concerned that you, a Twitter user, may be missing “something that you care about,” because of all the effort involved in lifting your finger to tap on a video to play it.

Therefore, videos will now play automatically and silently; you still have to either tap, or twist your device to landscape mode, before the sound comes on, if available.

The change is coming immediately to Twitter’s app for iOS and to the twitter.com website, and soon to Android. No word yet about Windows Phone, for which the Twitter app also lacks the video posting feature present in the iPhone and Android apps.

The real story here is that Twitter is anxious to find better ways to monetize its, sorry, your content; the company has posted a second announcement aimed at advertisers. “During our autoplay tests we saw a 7x increase in completions of Promoted Videos,” says Senior Product Manager David Regan. Advertisers will be charged if a user has a promoted video 100% in view and watches it for 3 seconds or more."

If you think the autoplaying videos are annoying, or that they will munch through your mobile data plan, you can disable the feature on the web and in the app settings.

When Twitter launched in July 2006, its attraction was based on short bursts of stuff – limited to 140 characters – combined with the user’s ability to control whose tweets they saw via the explicit following of other users.

Promoted tweets mean that users now have less control over the content they see, while first images, then Vines, then video, and now autoplay videos, mean that the 140-character concept has been thoroughly undermined.

That said, Twitter remains more sharply focused for users than Facebook or Google, and people who value Twitter’s independence must also accept that the company has to get better at achieving profitability. ®