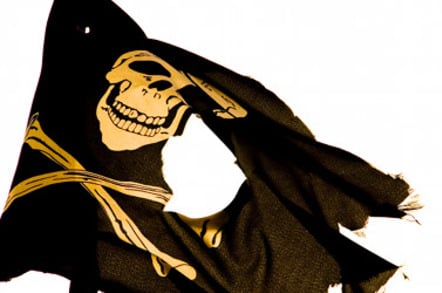 Pirate Party founder Rick Falkvinge* has declared war on “oldmedia”, which he spells as one word. His Falconwing News service will pump out three-sentence “stories” scraped from real news sources and posted as images. Advertisers will be able to inject their ads into this stream.

He vows that he’ll pay writers “better” than “oldmedia”, claiming the startup is creating 682 new jobs. However, since he hasn’t actually raised any money yet, and is still at what startup land euphemistically calls the “pre-revenue stage”, he can’t pay them a penny for some time.

“I estimate it will take some months until the necessary revenue is there,” he writes.

This mirrors the Silicon Valley content farm model, where people contribute for free (see Facebook) or for a pittance (see the Huffington Post and the Forbes website), while the aggregator accrues all the value. Nevertheless Mr Hawkwings is selling it as an ethical proposition:

By Falkvinge/Augustsson’s calculations, 30,000 views of a Falconwings newsgobbet are needed before the service will begin to yield the first revenue. Contributors will be paid in Bitcoins, naturally.

The Pirate Party’s heyday was in 2011, when it boasted three MEPs, and grabbed almost nine per cent of the vote in Berlin. The German Pirate Party then ran into trouble because members wouldn’t pay their membership fees.

Following that, the Pirate Party’s vote collapsed in the 2014 European elections, with the Pirates losing two of their three MEPs in a parliament of 736 members. Falkvinge hailed the vote as a “strong improvement”.

Falkvinge has argued that the possession of child pornography should be legalised. 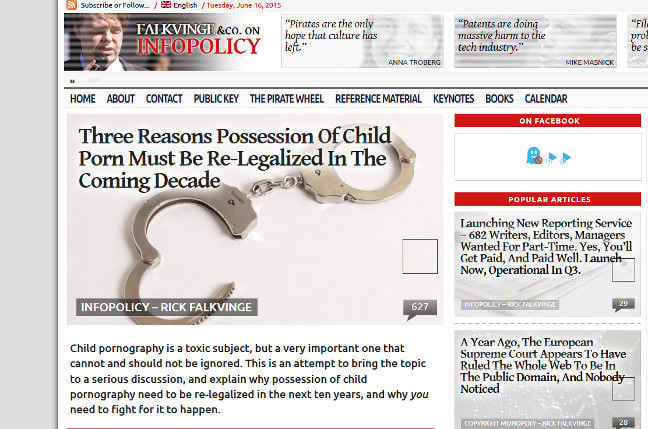 Screenshot from Falkvinge's personal website here. Add the page to your browser history at your own peril

The Swedish copyright activist was born as plain old Dick Greger Augustsson, and adopted the name “Falkvinge” (or “Hawk Wings”) as a pseudonym because “large raptors symbolise pride, freedom and vision”, according to his splendid Wikipedia entry.

Some may think this is gauche or pretentious – but imagine how enriched public life would be if more people changed their name to their game avatar. For example, George Osborne could be George Merlin71, or George CockMaster. Reader suggestions are welcome.

Seeks freetard vote for 'solutions we're in dire need of'

UK Parliament roars: Oi! Zuck! Get in here for a grilling – or you'll get a Tower of London tour

No salty bums on Riksdag seats