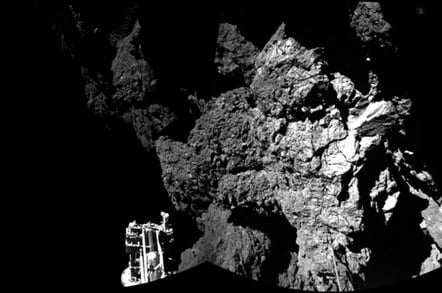 The Philae lander has woken from hibernation for the first time since its 60-hour, energy-draining mission on Comet 67P/Churyumov-Gerasimenko last November, scientists at the European Space Agency confirmed today.

Signals from the probe reached the ESA at its ops HQ in Darmstadt late last night.

Philae, whose contact went dark on 15 November, called home to Earth for a tantalising 85 seconds, boffins at the agency said.

"Philae is doing very well: it has an operating temperature of -35°C and has 24 Watts available."

He added that the lander was "ready for operations."

It also appears as though Philae was awake at an earlier point. Dr Ulamec said:

We have also received historical data – so far, however, the lander had not been able to contact us earlier.

Hello Earth! Can you hear me? #WakeUpPhilae

The Rosetta team hopes to hear more from Philae, which still has more than 8,000 data packets in its mass memory.

That information would feed scientists details about what happened to the probot in the past few days as it rests on the gas-burping, icy surface of the speeding comet.

On Thursday, the ESA said it had pinpointed a good candidate for the location of Philae on 67/P. Its exact landing spot has remained a mystery since the probot touched down on the comet last November. ®