Boffins, feeling around in dark for Philae, lit up by bright spot on Comet 67/P

'Impossible to be sure if it is plucky probot' 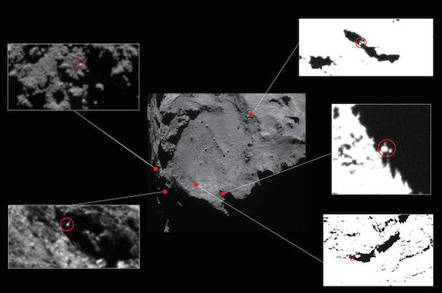 Vid The European Space Agency has determined a "good candidate" for the location of its Philae probot, which successfully landed on Comet 67/P in November last year.

Since then, the location of the spacecraft's final resting place has remained a mystery for boffins working on the Rosetta mission.

However, on Thursday the ESA said in a lengthy blog post that it may have tracked down Philae.

Scientist Philippe Lamy, a member of the OSIRIS team at the Laboratoire d’Astrophysique de Marseille, said:

Although the pre- and post-landing images were taken at different spatial resolutions, local topographic details match well, except for one bright spot present on post-landing images, which we suggest is a good candidate for the lander.

This bright spot is visible on two different images taken in December 2014, clearly indicating that it is a real feature on the surface of the comet, not a detector artefact or moving foreground dust speck.

But the agency's boffins, who had previously identified and then ruled out four other candidates for Philae's whereabouts, added that it was "impossible to be sure" that they had finally found the lander.

Closer flybys of the gas-belching 67/P are needed to capture higher-res images of the potential resting (or indeed, restless) spot for the plucky probot, which was the first man-made 'craft to land on a comet.

"Knowing where Philae is would provide important context for the lander measurements and valuable information for its possible future operation," said Rosetta's project scientist Matt Taylor.

"In the meantime, Rosetta is continuing to observe the comet from a range of distances as the comet’s activity increases.”

Boffins remain hopeful that Philae will wake from hibernation as Comet Churyumov-Gerasimenko (67/P) approaches the Sun, which could feed much-needed power to the lander. ®