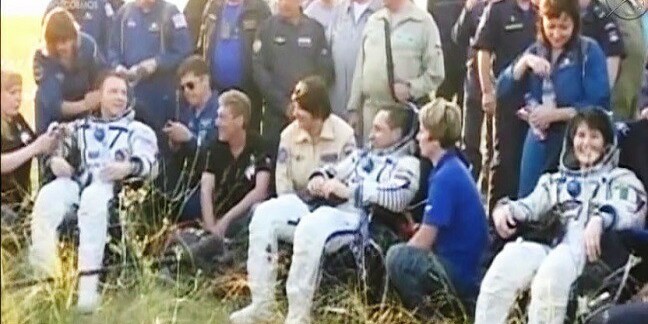 A NASA blog explains that Russian recovery teams helped the crew exit the Soyuz vehicle and adjust to Earth's gravity once again.

The three 'nauts undocked three hours before landing. The undocking was the culmination of Expedition 43, which saw the spacefarers spend 199 days aboard the ISS, clocking almost 84 million miles of orbit. For a sense of scale, the Earth is only 93 million miles from the Sun.

The crew spent their time conducting research and technology demonstrations and return with some items and samples which had been used as part of these research investigations, or were produced by them. They also showered defenceless Earthlings with their burning turds.

NASA has provided a video of their extraction from the Soyuz craft.

The ISS is now occupied by the 'nauts of Expedition 44, lead by Commander Gennady Padalka of Russian's Roscosmos, and flight engineers Mikhail Kornienko, also of Roscosmos, and Scott Kelly of NASA.

Kelly and Kornienko are two and a half months into their year aboard the ISS collecting valuable biomedical data that will inform future deep space, long-duration missions.

The remaining members of the Expedition 44 crew, NASA's Kjell Lindgren, Roscosmos' Oleg Kononenko and Kimiya Yui of the Japan Aerospace Exploration Agency, are scheduled to launch from Baikonur, Kazakhstan, in late July. ®