Clear out of street furniture unlikely though 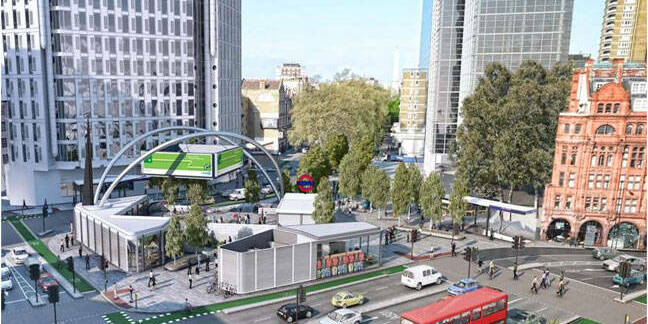 Following a period of consultation, Transport for London has published a report showing that a significant proportion of the 1,300 people who expressed an opinion thought the idea of converting London's so-called Silicon Roundabout into a U-Bend incorporating a "peninsula" was A Good Thing.

Under the plan, the amount of space for cars, and anything which might come out of the nearby fire station, will be considerably reduced as the one-way roundabout becomes two-way, and while one of the objectives is to reduce street furniture the plan calls for “clear signals, street marking and signs”.

There will be lots of new cycle lanes, although in practice most cyclists going between Old Street and City Road will just nip across the new “new public open space”.

Rather than create a cycle lane which kept 12 tonne busses away from cyclists, the Old Street Eastbound bus lane has been widened to allow them to co-habituate. Three of the tube exits will be closed with a new central exit created.

With the peninsular on the North side people going to Moorfields Eye Hospital will still be able to walk there without crossing the road.

Bus lanes are now 24 hour, and there will be a new Boris Bike docking station. Right turns from Old Street Eastbound into City Road Southbound are banned.

Opinions were canvassed through direct email to people whose Oyster cards showed they used the area, press advertising, geo-targeted online advertising, local SMS, leaflet drops and letters to local residents. Only 30 per cent of respondents were motorists while 79 per cent were tube users.

It did, however, caution that there were concerns about the effects the scheme might have on traffic with 45 per cent of respondents not knowing what effect the scheme could have on motorists, and 28 per cent felt it might make conditions worse for these users.

“We suggest that until the early 2020s the peninsula could feature a new public space with a small number of retail units. The space would also include a new entrance to Old Street station," said TfL.

There are plans to refurbish the station below the U-Bend after 2020 and this would affect what TfL does with the land after that. ®