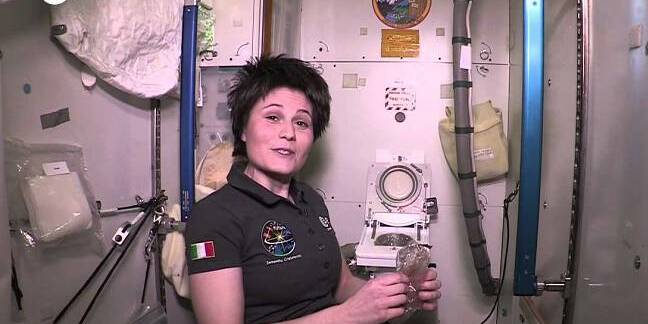 No more urine-espressos for Cristoforetti.

Three astronauts aboard the International Space Station are leaving the orbiter and landing in Kazakhstan this afternoon. Their departure was delayed after an earlier rocket failure.

No longer will Italy's first woman in space sip piss-derived espressos while her team eats caviar and showers us meagre planet-dwelling apes with their flaming turds, as the crew today finally returns to Earth.

Initially due to return a month ago, the extended stay aboard the ISS was welcomed by self-confessed Trekkie Cristoferetti with the Twitter hashtag #MoreTimeInSpace:

Looks like it's not time to get my spacesuit ready yet... what a present! #MoreTimeInSpace http://t.co/i26pwWu8Oo pic.twitter.com/HzSuRjFQpE

When the the Soyuz TMA-10 spacecraft departed last year, its resident NASA astronaut and pair of Russian cosmonauts landed in the snowy steppes of central Kazakhstan on schedule, though inclement weather meant they were quickly extractedwithout the routine on-site medical tests.

This Soyuz spacecraft will undock from the ISS at 1120 BST (1020 GMT) and will land in Kazakhstan roughly three hours later.

NASA is broadcasting the conclusion of Expedition 43, an expedition which saw the team of Commander Terry Virts, Anton Shkaplerov and Samantha Cristoforetti conduct scientific experiments in such an extraordinary environment over seven months.

Expedition 44 has now formally begun, and control of the ISS has been handed over to the Russian cosmonaut Gennady Padalka, whose colleagues are fellow cosmonaut Mikhail Kornienko and US astronaut Scott Kelly. ®

Roundup Meanwhile: the UK government is going to clear everything up. Or at least keep an eye on it