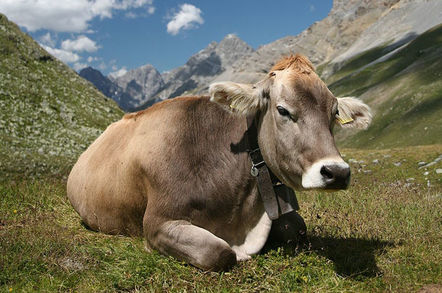 Moo: This cow is less polluting than traditional cars - and electricity generation

Electric car maker Tesla needs to turn vegan by dropping leather upholstered interiors or play its part in the destruction of the Earth, according to some of its shareholders.

Talking at yesterday’s AGM, Mark Peters and his vegan wife Elizabeth Farrell Peters – both Tesla fans who took a financial punt on the government-subsidised firm – pushed for change.

Farrell Peters was gifted her first Tesla as an anniversary present by her hubby, but later found out he had to go through “extreme measures to get a fully vegan Tesla”.

“I was very surprised by this because I thought Tesla was such an environmentally aware company,” said Farrell Peters, who confirmed she “grew up” on a veal farm.

According to the American Chemical Society, transportation creates 26 per cent of all greenhouse gas emissions in the US, but raising livestock for food is the cause of just three per cent of harmful emissions.

In poorer economies, the emissions threat is not so much that people may start eating meat; more that they may start driving cars. Undeterred by stats like these, Farrell Peters said:

“Tesla can continue to fill cars with the skins of sentient beings that suffer unspeakable horror while adding massive amounts of greenhouse gas into the air.

“Or, Tesla can adopt one of the many faux leather materials used by Mercedes Benz, Leux, BMW, Infiniti and others that are cruelty free, have wonderful reviews, last a long time, come in multiple colours and involve far less greenhouse gases”.

Mr Peters described the use of leather as “unTesla”, and requested the “environmental black hole” at the company be “fixed”, rather than filled. “We and the future occupants of lifeboat Earth truly trust you.”

One of the proposals is to expunge animal products in the cars by 2019. Tesla cars can be bought without leather sets but not free of leather trim.

The board, rather unsurprisingly, recommended a vote against the two shareholders' policies, as finding non-animal alternatives to leather would “impede or delay” other, higher priority tasks.

Working out how to pocket another round of government subsidies might be more pressing. ®

'Doubly unacceptable' Swiss vegan forces his way into the army

Tax or warfare? Right, where do I collect my rifle...