Tech giants gang up on Obama over encryption key demands

C'mon, Barry. Quit trying to kick down our front doors 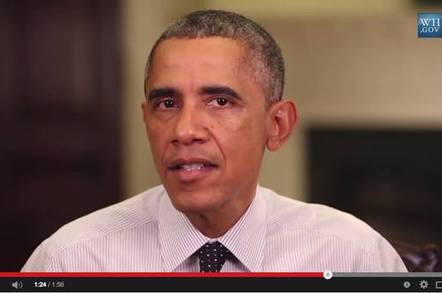 A pair of technology industry pressure groups have sent a letter to President Obama asking his administration to back off demands that companies give government agencies the ability to decrypt all user data.

In the letter [PDF], the Information Technology Industry Council (ITIC) and the Software and Information Industry Association (SIIA) ask the President to curb the NSA from demanding that companies hand over decryption keys or require them to otherwise weaken their encryption.

"We are opposed to any policy actions or measures that would undermine encryption as an available and effective tool," the groups write. "Encryption is an essential asset of the global digital infrastructure, enabling security and confidentiality for transactions as well as assurances to individuals that their communications are private and information is protected."

Between them, the two cosigning groups count as members some of the largest companies in the tech and finance industries. Represented by ITIC are Apple, Fujitsu, HP, IBM, Intel, Microsoft, Oracle, Samsung, SAP, Twitter, VMware, and Yahoo!, among others.

The companies have drawn criticism from the US federal government – and law enforcement and intelligence agencies, in particular – which want the ability to decrypt the data from any user device when conducting investigations.

The groups argue that if customers knew that companies could be forced to hand over decryption keys to the government, they could start looking elsewhere for their technology needs, including outside the US.

"In addition to these security and trust concerns, the US policy position on encryption will send a signal to the rest of the world. Should the US government require companies to weaken encryption technology, such requirements will legitimize similar efforts by foreign governments," the groups write. "This would threaten the global marketplace as well as deprive individuals of certain liberties." ®