Nobody trusts Huawei because of 'security issues'. *Cough* NSA *Cough* 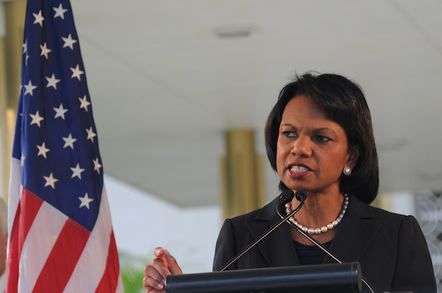 Former US secretary of state Condoleezza Rice says China's plan to use Huawei as a Trojan Horse for espionage has failed and that the Middle Kingdom has learned its lesson and developed a new approach to global commerce, as shown by e-commerce giant Alibaba's operations.

“China wanted Huawei to be a big, dominant telco player,” Rice told the Nutanix .NEXT conference in Miami today. “The problem is, nobody really trusts Huawei because of cyber-security issues.”

“The Chinese are finding now that there's a trade-off between wanting to be a global economic player. So they've not made that mistake with Alibaba. They are delighted that Alibaba is in the markets and that the IPO was a stunning success. Once in a while they call [founder and chair] Jack Ma and remind him it's a Chinese company – the propaganda people do.”

Rice went on to say that the USA, which she portrayed as the world's guarantor of democracy and open markets, can prevent Chinese aggression in the markets - or meatspace - by deciding to “just float the Pacific Fleet out there. They'll get the message. We don't really need to yell at them about the South China Sea.”

With that unpleasantness out of the way, she thinks the USA and China can talk about engagements that create growth oportunities for all.

Rice's remarks didn't touch on the US National Security Agency, which has, of course, been caught out spying on the USA's friends and enemies alike. Her speech, however, was a ringing endorsement of American exceptionalism; the doctrine that the US is inherently different and therefore gets to play by its own rules.

Those rules, she said, should continue to include laws that allow the nation to import technology innovators. The USA's education system, she acknowledged, isn't producing sufficiently-skilled people in the numbers needed to sustain the nation's innovation-based economy. Nor is it educating the nation's young adequately, which she feels erodes US power over time.

Only 30 per cent of young Americans, she said, pass the US military's basic entrance tests. Failure can be due to medical problems including obesity, tattoos in the wrong places or lack of a High School Diploma. Rice seemed to be referring to the latter as the issue about which she was most concerned.

As well she might: as an adviser to – and reportedly a stockholder of – Nutanix, she has an interest in better local education standards.

And as a former secretary of state, she has an interest in those aboard the Pacific Fleet being able to read when they sail off to keep the world safe for democracy and American commerce. ®