Everything Apple touted at WWDC – step inside our no-hype-zone™ 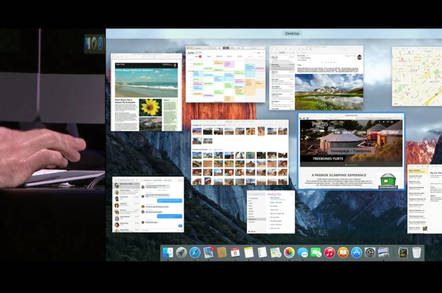 WWDC 2015 Apple kicked off the 2015 Worldwide Developer Conference (WWDC) in San Francisco on Monday by revealing three new OS releases due out by the end of 2015.

Here are some of the key points from the introductions of OS X El Capitan, iOS 9 and WatchOS 2 – without all the usual dreadful hype that surrounds these sorts of PR events.

OS X El Capitan: Yes, OS X 10.11 is really called that. The successor to Yosemite will be released to developers today, with a free beta hitting the public in July, and general availability in the Fall. It will be a free update for Yosemite users. Key features include…

iOS 9: Like El Capitan, iOS 9 will be made available immediately to Apple Developer account holders with a public beta in July and general release in the Fall (likely alongside a new iPhone). For all devices running iOS 8 it will be a free update and will not carry any additional hardware requirements. It will bring a laundry list of new features, including:

WatchOS 2: The main addition on the new Apple Watch firmware will be support for native apps. Like the others, it won't make its way to end users until the Fall, but developers can start building for it today.

And finally, there was the usual "one more thing"™ from Tim Cook, the Cupertino answer to Spotify: Apple Music. The service mixes iTunes streaming with a 24-hour online radio network branded "Beats 1." More on that right here. ®