The watts in a box that kept West London's lights on 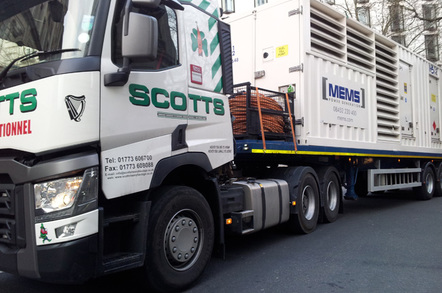 A fire in the Victorian tunnels beneath Kingsway in central West London on Good Friday, in April, pulled the plug on thousands of businesses in a small area.

The blaze – which burned for a day and a half – succeeded in damaging 19 high-voltage cables, leading to a significant loss of load on local utility provider UK Power Networks' grid in that area.

More than 3,000 of UK Power Network’s customers were initially affected, including the Civil Aviation Authority (CAA), whose offices sit above the junction box that caught fire on Kingsway. Internet service providers with switches in the area saw online access for customers cut.

At the peak of the blaze, 10 fire engines and 70 fire fighters were on the scene, not to mention police keeping the main road and side streets clear of pedestrians and vehicles.

Public disruption was one thing, but what of the power situation? How did that go down?

Tony Cohen, head of network operations for London Region at UK Power Networks, told The Register that hundreds of UKPN staff were brought in, as well as contracted staff. They worked 24 hours a day, in what he called difficult conditions, making the repairs that saw more than 1,400 metres of excavations made in the surrounding area.

Above ground, the streets around Holborn and Covent Garden reached gridlock, as massive lorries attempted to fight their way through the narrow lanes to bring in generators, in a desperate attempt to provide temporary power for businesses. Due to the scale of the job, generators were provided with police escorts from a meeting point on Waterloo Bridge.

Medway-based generator hire company MEMS Power delivered 52 generators in total to businesses in the area over three days, providing a total power output on site of over 40MW. The biggest generator provided by MEMS was a 1250kVA, 45-foot articulated trailer. For the record, MEMS generators go up to 2000kVA, with the ablity to lash units together to produce more than 25MW of power.

Kelly Long, a spokeswoman for MEMS, said that within 20 minutes of the first phone call it had generators leaving the yard – they were on site within an hour and a half. Clients with disaster-recovery contracts were given priority access to reserved equipment. “Due to the prior knowledge of their sites detailed in their plans, they could expect to have power within 4 hours from the initial call,” Long said.

"For other companies, an absence of prior knowledge about their sites and a reliance on customers who were often non-technical in providing us details of their equipment requirements added to the challenge of restoring power," Long added. “The majority of clients were unprepared for the situation and how to organise all that’s involved with installing a temporary supply. They had no idea who to call and how to reinstate via a temporary supply.”

Cohen reckoned UK Power Networks was able to restore power to the majority of the 3,100 customers affected on the same day as the incident. “Those customers who could not be restored by repairing the network and rerouting power were quickly installed with a combined total of 35 generators to get their power back.”

Within 48 hours, the power was beginning to be restored and many generators were switched off but left in location on standby until the mains supply was stable.

The lesson for anybody with a stake in their company's power supply was clear: make sure you've got a back-up plan in place and the utility or the boxed generator firm knows who they can reach if the lights do go out. ®