Au-mazing! Cornwall sold GOLD to Ireland back in the Bronze Age 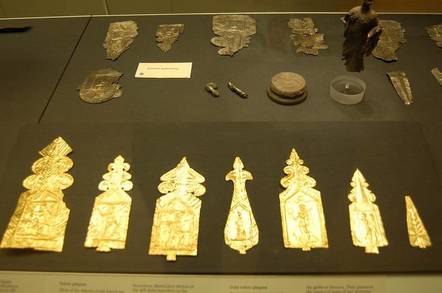 Paleo-boffins from the the University of Southampton have found evidence of an ancient trade route for gold between Ireland and Cornwall in the south-west of Britain. The study suggests people were trading gold between the two islands as long ago as the early Bronze Age, around 2500BC.

In a paper titled A Non-local Source of Irish Chalcolithic and Early Bronze Age Gold, published in the Proceedings of the Prehistoric Society, the boffins raised questions about the extraordinary early Bronze Age gold hoards that have been found in Ireland far more commonly than anywhere else in Europe.

The research, which was conducted in collaboration with the University of Bristol, used a new technique to measure the chemical composition of some of the earliest gold artefacts in Ireland. Findings show the objects were actually made from imported gold from Cornwall, rather than that which might be found in Ireland.

First author Dr Chris Standish acknowledged that "this is an unexpected and particularly interesting result, as it suggests that Bronze Age gold workers in Ireland were making artefacts out of material sourced from outside of the country, despite the existence of a number of easily-accessible and rich gold deposits found locally."

Using an advanced technique known as laser ablation mass spectrometry, the boffins sampled gold from early Bronze Age artefacts and measured isotopes of lead against the composition of gold deposits found in a variety of other locations.

After analysis, the archaeologists concluded that the gold in the objects they tested – 50 early Bronze Age artefacts in the collections of the National Museum of Ireland – most likely originated from Cornwall, rather than Ireland. While Cornwall is well known to be a source of tin, a common alloy for copper in the creation of bronze, finding gold being exported from the region was surprising.

"Perhaps what is most interesting is that during this time, compared to Ireland, there appears to be much less gold circulating in Cornwall and southern Britain. This implies gold was leaving the region because those who found it felt it was of more value to trade it in for other ‘desirable’ goods, rather than keep it," Dr Standish suggested.

A University of Southampton press release noted that, while gold is today intrinsically linked with economic wealth, it may not always have had this value.

"In some societies, gold was seen to embody supernatural or magical powers, playing a major role in belief systems rather than economic ones. The value and significance placed on gold may have varied from region to region." ®