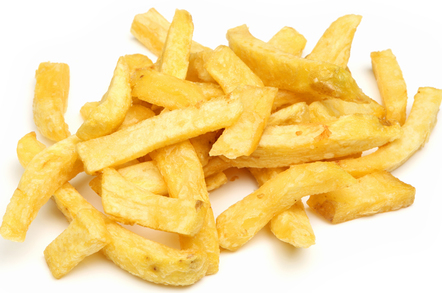 The European Food Safety Authority (EFSA) has grimly concluded that those tucking into fried potato products run an increased risk of damaged DNA and developing cancer.

The culprit is the chemical acrylamide (AA), which "naturally forms in starchy food products during every-day high-temperature cooking (frying, baking, roasting and also industrial processing, at +120°C and low moisture)."

The EFSA's "scientific opinion" paper explains: "It forms, at least in part, due to a Maillard Reaction between certain amino acids, such as asparagine, and reducing sugars. However, several other pathways and precursors have also been proposed to contribute to AA formation. AA forms in numerous baked or fried carbohydrate-rich foods, including French fries, potato crisps, breads, biscuits and coffee. AA is also known to be present in cigarette smoke."

The EFSA adds: "Following ingestion, acrylamide is absorbed from the gastrointestinal tract, distributed to all organs and extensively metabolised. Glycidamide is one of the main metabolites resulting from this process and the most likely cause of the gene mutations and tumours seen in animal studies."

Before binning the chips and the coffee and tucking into a nice salad, though, bear in mind that "the data from human studies were inadequate for dose-response assessment".

That means the EFSA's opinion on the possible effects of AA on humans are extrapolated from animal tests. Mind you, the results make for sobering reading:

Lovely. However, before we curse French chemist Louis-Camille Maillard and his damned reaction, let's consider that it's the same process which is responsible for the miraculous power of frying bacon to cure hangovers.

As Elin Roberts, science development manager at the Centre for Life in Newcastle, explained back in 2009, "If you’ve got amino acids and reducing sugars at a heat above 150°C, it kickstarts the Maillard Reaction in the pan. That means lots of lovely smells are released and it's this which draws us in." ®