Stand-up and be counted²: Nerd is the funny word 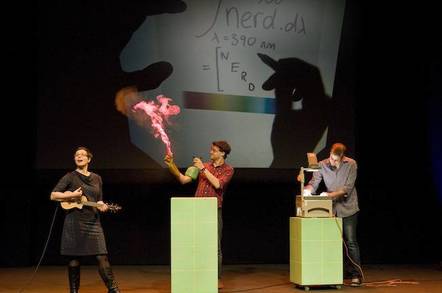 Comedy Review Anyone who, like me, is keen to add an educational twist to traditional comedy or circus skills should check out these three geeky Edinburgh previews.

With any luck, you'll be able to watch the shows at your local playhouse. As for me, I managed to pull myself away from the latest episode of King of the Nerds to join my fellow dorks at The Udderbelly Festival on the Southbank in London.

So, without further ado ...

Festival of the Spoken Nerd

These peeps certainly know how to overclock a crowd of comedy fans. While explaining electrons in their own special way, they create a huge circuit of willing audience members holding hands to play Snap's '90s hit I Got the Power through an amp.

A ukulele lullaby to the Philae lander snoozing on a comet flows smoothly into gags on self-referential formulae and Euler diagrams, in what turns out to be an astonishingly entertaining and informative piece of stagecraft.

Overheard on the way out “Oh I do like a good graph!”

Juggling is pants, in my opinion, unless of course it involves fire or knives.

Sadly, these are missing from the Circus Geeks' performance and are replaced with graphs, statistics and a demonstration of the juggling lexicon (I’m a sucker for a bit of Mexican Juggling).

As a piece of educational, family-friendly fun, this routine has the smaller children in the front row gasping with pleasure as the trio juggle chairs and perform an impressive 10 ring pass to the dulcet tones of Noah and the Whale, while trying to avoid eviscerating a unicyclist.

There are no obvious fluffs and – aside from deliberate gaffes – nothing gets dropped. This is probably due to the punishment for screwing up a routine: Arron is slapped round the chops by an increasingly large and smelly fish. 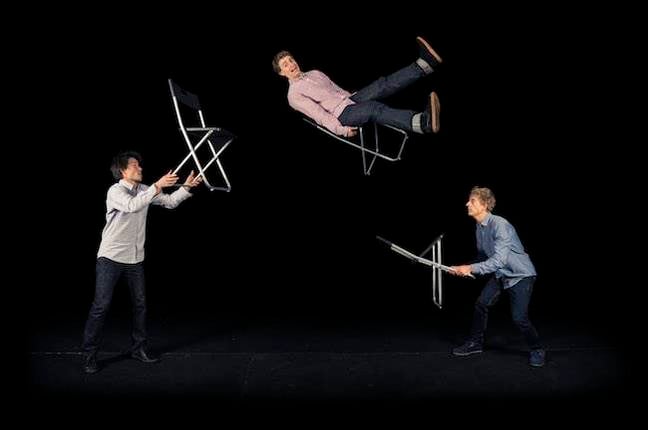 The final 3D time-lapse projection sequence leaves me feeling like I've slipped some 2C-B in my Strongbow Dark. Even then, this show still didn’t manage to convince me that juggling is cool.

There’s one thing guaranteed: if you start your show at 10.45pm everyone is going to be hammered and that's no better state to be in to see The Dark Room.

In this cult Youtube hit, the audience is, as you might expect, trapped inside a dark room (or, more specifically, an upside down purple cow) and must battle the Evil Floating Head (on YouTube) and Troll straight out of Slimelight (in person) in a logic-defying quest to escape from text-based gaming hell.

Part Goth panto, part live action video game, The Dark Room promises a £1,000 grand prize (or some smashed crockery) for anyone with enough wits, after six pints of cider, to beat the game and escape The Dark Room.

The rules are simple:

1. Options appear on a screen.
2. You call out the option you want.
3. The screen tells you if you’re right. Or dead.
4. In the end, everybody sings Go West.

Underneath all the black rubber and LEDs is stand-up comedian John Robertson, who’s booming voice and substantial suborbital ridge help him embody his turn as ringmaster of the surreal.

It's an hilarious show for anyone who’s ever worked their way through a Fighting Fantasy gamebook, remembers ASCII MUDs or just likes being drunk and shouty in the dark. Poor old Spasmo the Dog.

More details can be perused within these pages. ®

Infosec Europe Researchers: We can nudge ships off course

National Audit Office: UK's military is buying more than it can afford

Yeah... thanks for that, sniffs Ministry of Defence