A pause in global warming? What pause?There was no pause

Oh, people can come up with statistics to prove anything 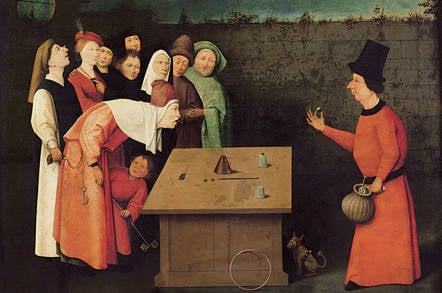 "And with this one, I make it all come back again!"

Scientists have made the inconvenient “pause” in global warming disappear with a wave of their statistical wand. A new paper published in Science by NOAA estimates that global temperature during period 1998 to 2012 increased twice as fast as all other estimates had calculated.

However, the paper has immediately run into a wall of criticism. The study eschews six of the seven temperature sets used by climate scientists and plumps for the one regarded as problematic, and indeed shunned by the UK’s own Met Office.

Where instrument readings don’t exist (such as for the Arctic), numbers have been “infilled” or guesstimated. Past temperatures have been massaged to emphasise recent warming, with the baking 1930s erased.

And even after all that, the paper only produces a low (0.90) confidence for the assertion.

The pause in global warming, now almost two decades long, was acknowledged by the IPCC, although the published version (after input from bureaucrats) buried the acknowledgment deep in the report.

A final draft stating (correctly) that “Models do not generally reproduce the observed reduction in surface warming over the last 10-15 years” was cut. Well over 30 papers have been advanced (here’s a handy list) to explain the hiatus, falling into over a dozen categories.

But they’re all wrong, reckons Thomas Karl, director of NOAA's National Centers for Environmental Information (NCEI), who has found warming that nobody else has previously noticed.

The pause or ‘hiatus’ in warming was in fact imaginary, because temperatures rose twice as fast as studies the IPCC quoted. By its calculations, the rate of warming over the twelve year period was 0.09C rather than 0.04C per decade. 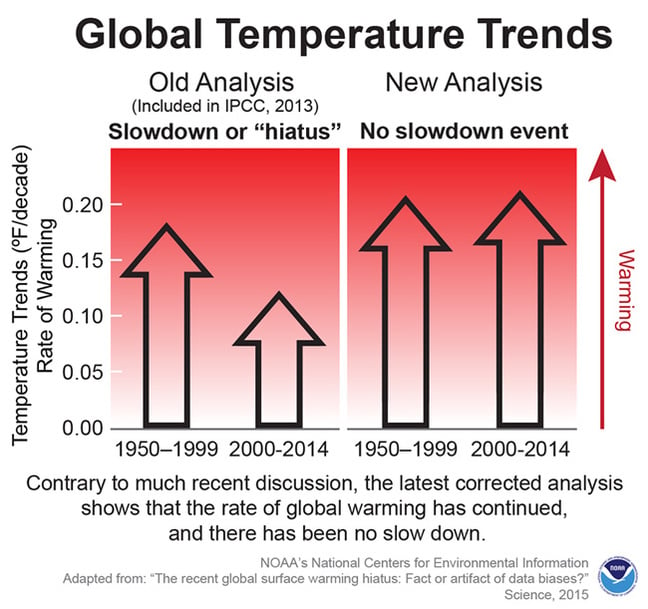 It’s magic – so how did they do this? With the Vulture Central so close to London’s premier magician supplies shop, we have some useful insights.

“I personally see no reason to the use the NOAA (National Oceanic and Atmospheric Administration) ERSST dataset; I do not see any evidence that the NOAA group has done anywhere near as careful a job as the UK group in processing the ocean temperatures," writes climate scientist Judith Curry of Georgia Tech.

“This short paper in Science is not adequate to explain and explore the very large changes that have been made to the NOAA data set ... I don’t regard it as a particularly useful contribution to our scientific understanding of what is going on.”

In addition, skeptical climate scientists including Richard Lindzen note Arctic data that doesn’t exist has been extrapolated, or put another way, “invented”.

2. Torture the numbers until they confess 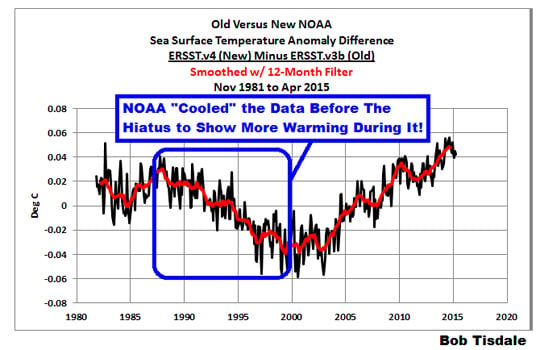 According to the UK Met Office’s John Kennedy, the buoy observational data has an uncertainty range of 0.12C. Karl and co simply slapped 0.12C onto every bouy reading.

“Adjusting good data upward to match bad data seems questionable, and the fact that the buoy network becomes increasingly dense in the last two decades means that this adjustment must put a warming trend in the data”, Lindzen et al retort.

3. Remember: Nobody reads the small print Remember the “chocolate makes you lose weight” story a few weeks ago? It was a brilliant prank by a science writer, and hundreds of news outlets fell for it.

He bet that journalists churn stories around without checking the source or looking for any caveats – and climate scientists can use this to their advantage too. The confidence level (0.90) here means “we’re not very confident about this at all”. But nobody will check.

You can find a cool and pretty dispassionate analysis of the statistical magic in the study by economist Ross McKitrick here. ®

Wait, isn't this year expected to be a strong El Nino year? Possibly the strongest and warmest for almost twenty years? Many climate scientists think so.

So why not wait for observational data? Only a cynic would suggest that studies that use reliable data and eschew statistical tricks won't be ready in time for COP21, where they're needed for political reasons.

You only need to wait … a couple of million years