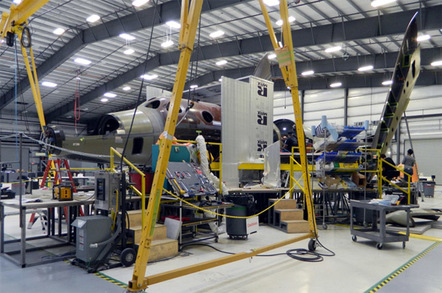 Virgin Galactic will be carrying aloft its first paying customers "within 18 months to two years", according to chief executive George Whitesides.

Speaking to the BBC at the Mojave Air and Space Port, Whitesides said the company is on track for lift-off "maybe sooner, but not much longer", despite being some way off finishing the replacement for its crashed SpaceShipTwo.

The loss last year of the VSS Enterprise was a major blow to Virgin Galactic. Pilot Michael Alsbury was killed in the disaster, caused by deployment of the vehicle's rotating tail boom "feather" atmospheric re-entry system during solid rocket motor burn.

According to the National Transportation Safety Board (NTSB), Alsbury manually unlocked the system around nine seconds after motor ignition, although the tail booms apparently moved themselves into the feather position, provoking a catastrophic structural failure at "just above approximately Mach 1.0".

While the final NTSB report into the accident is due in few weeks, Virgin Galactic is "confident this wasn't a design issue". The BBC reports that on the new SpaceShipTwo "it'll be made physically harder to unlock the feathering system at the wrong time".

While it might be imagined that the crash seriously rattled future SpaceShipTwo passengers, who've already stumped $250,000 a head for a ticket, Whitesides insisted: "The vast majority of our customers, so about 98 per cent, have been really terrific, very supportive. What we are doing is not easy, it's an historic thing. What we are doing is opening up space to the rest of us. We are democratising space."

Virgin Galactic chief pilot Dave Mackay, who was at the controls of the White Knight Two mothership when the VSS Enterprise broke up, said: "You could look back to Otto Lilienthal crashing in his glider. If people had said then, 'you know this flying is dangerous, let's stick to walking on the ground', where would we be today?

"It is hard. It has turned out to be harder than we thought it would. But if it was easy, it would have been done a long time ago." ®