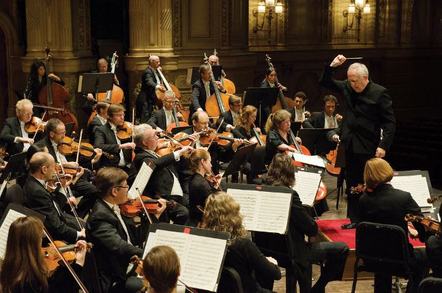 HP Discover HP has a grand plan for when it morphs into Hewlett Packard Enterprise later this year, and the key to it is a concept it's calling "composable infrastructure."

In his keynote at the HP Discover conference in Las Vegas on Wednesday, HP CTO Martin Fink said that to understand composability, you should think about a composer writing a symphony.

HP wants customers to be able to do the same with their IT infrastructures, pulling out components and replacing them with different ones as needed, without having to re-architect the entire system.

That is, of course, a tall order, so HP Enterprise isn't saying it will deliver it all at once. Instead, it will be a "multi-year journey," Fink said, in the form of what internally is known as Project Synergy.

"Our sights are set on delivering a new class of infrastructure ..." HP said in a blog post on Wednesday, "which are fluid pools of disaggregated compute, storage and fast flexible fabric that can be quickly composed, decomposed and then re-composed according to the needs of an application or workload through software-defined intelligence and a unified API."

The first fruit of Project Synergy, launched on Wednesday, is the aforementioned API, which is native in HP's OneView infrastructure management software. By wiring up their offerings with this Composable Infrastructure API, Fink said, ISVs can in effect treat infrastructure as code.

Or, as HP explains in a white paper [PDF] released on Wednesday, "A Unified API provides a single line of code to abstract every element of infrastructure. It enables fast, smooth integration and automation of the right compute, storage, and fabric resources (based on performance, cost, and security requirements) to support application services throughout their lifecycles."

HP has also launched a Composable Infrastructure Partner Program to encourage developers and ISVs to get on board with the idea of infrastructure composed of "fluid resource pools" – and with HP's APIs.

The initial members of this program should come as no surprise. They include Ansible, Chef, Docker, Puppet Labs, and VMware – all key players in the push to break down monolithic infrastructures into more manageable components.

Expect HP to talk up its grand vision plenty more over the coming months, as it looks to be a major thrust for the soon-to-be Hewlett Packard Enterprise. It may even prove to be the all-or-nothing gamble that determines the fate of HP, post-split.

As for the split itself, on Wednesday, HP executive veep of technology and operations John Hinshaw said that the separation would be effective on November 1, but that the two companies will begin operating independently behind the scenes beginning on August 1, to give them time to iron out any kinks. ®