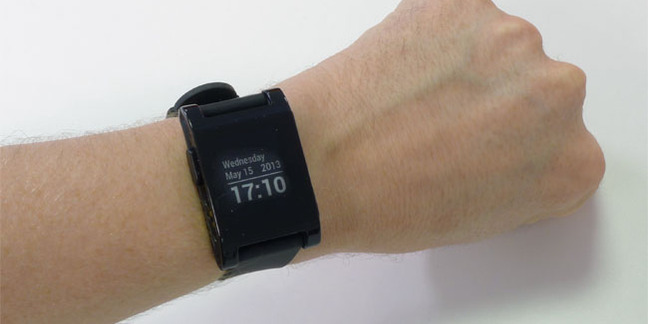 The makers of the Pebble smartwatch are moaning that Apple is taking its sweet time to approve the latest bug-fixed version of the Pebble Time iOS app. Completely coincidentally, Apple just recently launched its own smartwatch.

Team Pebble claims the official Apple App Store is stalling its approval of the Pebble Time software that allows people to control their wrist-gizmo from their mobiles.

Pebble says the latest version of the app has been held in limbo by Apple despite only making minor changes to the code.

A build of the app, version 2.6.6, was approved for release via the store on May 18, but can't be installed by users due to a quirk in Apple's system: Pebble found some bugs in 2.6.6, and submitted a bug-fixed build on May 22. The fixed update is sitting in a queue waiting to be approved, and the original 2.6.6 can't be installed from the store until the new build is approved, we're told.

That leaves Pebble Time owners with version 2.6.5 that dates back to February.

"The Pebble Time iPhone app, as we’ve all noticed, is not yet live on the iTunes AppStore. It remains in review," Team Pebble wrote, adding:

We’re doing all we can to mitigate the delay and make Pebble Time Watch for iPhone available for download. We unfortunately cannot simply publish the original submission approved on May 18 due to quirks in the AppStore submission process and rules.

Pebble beat Apple to the smartwatch market by several years, but virtually disappeared under the mighty publicity machines deployed by rich rival companies. The crowdsourced smartwatch biz relies on word-of-mouth geek-to-geek recommendations rather than expensive ads.

Apple has long held a policy of turning down apps that compete with its own products – it removes software from its App Store that refer to any gadget that rivals its iPhones, iPads and iPods. The iGiant started flogging its own smartwatch in April with the release of the Apple Watch to the public.

Apple did not respond to The Reg's request for comment on the matter. ®