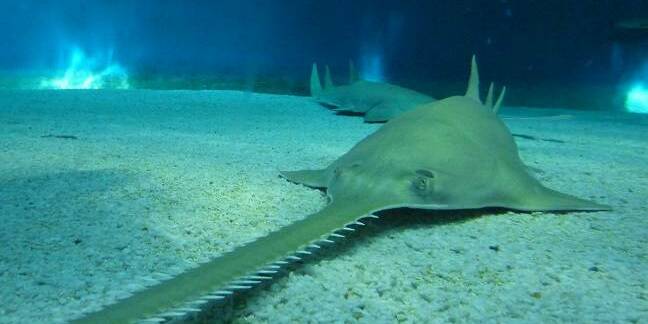 Piscine boffins have discovered a number of sawfish which they believe are the first virgin-born animals ever found in the wild from a sexually reproducing species.

Discovered in a Florida estuary, the scientists have found seven female sawfish which are the result of parthenogensis - the Greek term for “virgin birth”.

A statement issued by the Stony Brook boffins asks the question all men have secretly known the negative answer to since time immemorial.

Are males truly essential for reproduction?

Marine boffins from Stony Brook University, Florida Fish and Wildlife Conservation Commission, and The Field Museum have discovered that around three per cent of the sawfish living in a Florida estuary are apparently the products of this type of reproduction, the first evidence of this in the wild for any vertebrate animal.

While outwardly normal, these abhorrent freaks of nature live alongside other sawfish which have been produced through normal sexual reproduction, suggesting that occasional virgin births may be more common in natural populations than ever suspected. The scientists have not reported whether any conflict exists within the sawfish school between true sawfish and the creepy clones.

The statement reckons sawfish may be the first entire family of sea creatures to become extinct as a result of overfishing and coastal habitat loss.

Despite this, however, free-living parthenogens have never been observed in any of these taxa in the wild, although two free-living snakes were recently discovered each gestating a single parthenogen — one copperhead (Agkistrodon contortrix) and one cottonmouth (Agkistrodon piscivorus).

Vertebrate parthenogens are characterized as being of the homogametic sex (e.g., females in sharks, males in birds) and by having elevated homozygosity compared to their mother, which may reduce their reproductive viability.

Although it is unknown if either of the parthenogenetic snakes would have been carried to term or survived in the wild, facultative parthenogenesis might have adaptive significance.

If this is true, the boffins claim it is reasonable to hypothesize that parthenogenesis would be found most often at low population density, when females risk reproductive failure because finding mates is difficult.

We were conducting routine DNA fingerprinting of the sawfish found in this area in order to see if relatives were often reproducing with relatives because of their small population size,” said the study’s lead author, Andrew Fields, a Ph.D. candidate at the Stony Brook University’s School of Marine and Atmospheric Science.

"What the DNA fingerprints told us was altogether more surprising; female sawfish are sometimes reproducing without even mating."

The boffins are now encouraging other boffins, conducting similar studies, to take a few moments to screen their DNA databases from other animals to see if there are hidden parthenogens living in other wild populations.

"This could rewrite the biology textbooks," said Dr. Kevin Feldheim of the Pritzker Laboratory at The Field Museum in Chicago, where the DNA fingerprinting was conducted. "Occasional parthenogenesis may be much more routine in the wild than previously thought."

The research team speculates that since smalltooth sawfish are so rare, females might sometimes fail to find a male during the mating season, inducing the parthenogenetic process.

"It is possible that parthenogenesis is most often expressed in wild vertebrates when the population is at very low levels and the animals have difficulty finding one another," said Fields.

"Parthenogenesis could help endangered species like sawfish dodge extinction for a little while, but it should also serve as a wake up call that we need serious global efforts to save these animals." ®