Relax, it's going to Mars, not to your leaders 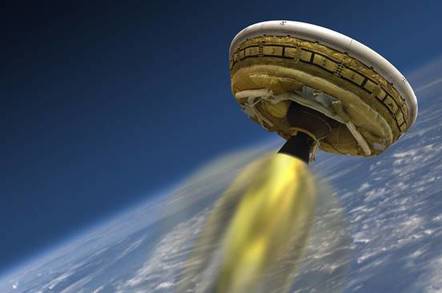 Pic On Wednesday, inhabitants of the Hawaiian island of Kauai will see a flying saucer rise up into the air, fire its rocket motors, and head into space – as NASA tests its Low Density Supersonic Decelerator (LDSD).

The LDSD is a circular spacecraft resembling the UFOs of old. It is 15ft (4.5m) across and weighs 6,808 pounds (3,088kg). It isn't testing a new propulsion system of spaceship design, but is going to be used to test two systems that could help humans land on Mars.

Mars is a bugger to land on: there's just enough atmosphere to superheat a spacecraft as it comes down towards the surface, but not enough to fly something down using wing-like aerodynamic surfaces. Instead, NASA is relying on parachutes and rocket assisted landing.

When the Curiosity rover made its descent, it was slowed by the largest supersonic parachute ever created, before detaching and hovering over the Martian surface using rocket motors. The rover was then winched down to the surface on four lines from a mothership – which, after releasing the robot, flew off and crashed out of harm's way.

The same system will be used in 2020 for Curiosity version two, but NASA wants to send heavier vehicles to the Red Planet, possibly containing astronauts, and that means a much bigger parachute. The LDSD is there to test two methods for slowing a spacecraft down.

The launch, to be carried out at the US Navy's Pacific Missile Range Facility at 1330 ET (1830 UTC), will send the disc-shaped test vehicle up to 120,000ft above sea level under a massive weather balloon. The craft will then fire side thrusters to ensure a stabilizing spin before firing a rocket that will punch it up to 180,000ft (55,000m) at a speed of Mach 4.

Once in the tenuous upper reaches of Earth's atmosphere, an environment similar to the atmosphere on Mars, the rocket will cut out, and NASA will test its first method of slowing down a spacecraft – the supersonic inflatable decelerator (SIAD).

The SIAD is an inflatable ring around the spacecraft that will increase its diameter to 20ft, providing more drag to slow the test vehicle. Once it has slowed to Mach 2.5 by this method the supersonic parachute will be deployed.

NASA is hoping for more success with this test than a similar one last year. Then the parachute deployed, but was quickly torn to shreds in the turbulent air behind the test vehicle. NASA thinks it has cracked that problem, and now expects the craft to float gently down into the ocean 45 minutes later.

The launch was due to take place on Tuesday, but was cancelled due to high waves in the landing area. Another attempt will be made on Wednesday and it can be watched live on NASA TV. ®