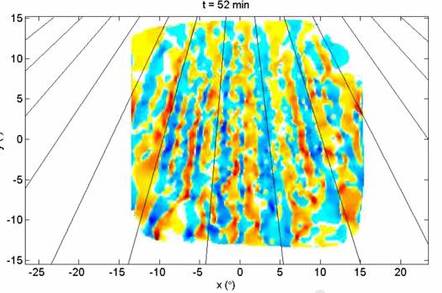 The huge energies in the ionosphere get shifted around in plasma “tubes”, observed for the first time by a Sydney University physics graduate student.

The work by graduate student Cleo Loi shows that the plasmasphere (the soup of electrons stripped away from atoms in the ionosphere) is strongly aligned with Earth's magnetic field.

The Murchison Widefield Array, one of the precursor projects to the international Square Kilometre Array (SKA), was used to capture “binocular” images to show the plasma tubes forming in the upper atmosphere.

The work, supported by the Centre for All-Sky Astrophysics (CAASTRO), sought to confirm by observation 60-year-old theories about the structures.

The “ducts”, cylindrical structures in the plasmasphere aligned with the Earth's magnetic field, are worth observing since plasmasphere activity interferes with satellite communications and navigation systems.

Boffins are also keen to characterise the structures, so they can allow for their activity in astronomical measurements.

To measure the plasma ducts, Loi and the CAASTRO research team took 46 snapshots with the MWA, each covering about 30° of the sky.

Those snapshots let the researchers measure how much a bunch of known radio sources seemed to be “offset” from their proper position – in other words, how much effect the plasma activity interfered with them.

Splitting the MWA's 128 antennas east-west let them measure the altitudes of the ducts – around 600 km high – and other measurements from the array showed a regularity that suggested the ducts' cylindrical shape.

As the paper, published in Geophysical Research Letters and available as an Arxiv pre-print, notes: “The structures are strikingly organised, appearing as regularly-spaced, alternating tubes of overdensities and underdensities strongly aligned with the Earth’s magnetic field”.

“We were able to measure the spacing between [the plasma ducts], their height above the ground and their steep inclination," Loi says in this university media release.

“We measured their position to be about 600 kilometres above the ground, in the upper ionosphere, and they appear to be continuing upwards into the plasmasphere. This is around where the neutral atmosphere ends, and we are transitioning to the plasma of outer space”.

According to the university, the observations went so well that they were initially treated as “too good to be true”.

The release quotes her supervisor, Dr Tara Murphy, as saying: “It is to Cleo's great credit that she not only discovered this but also convinced the rest of the scientific community. As an undergraduate student with no prior background in this, that is an impressive achievement.”

The group used the AGEAN source-finding software to locate the radio sources they measured, and compared those to the NRAO VLA Sky Survey catalogue to get the expected location of the sources (and therefore see how much they were disturbed by the plasma ducts). ®