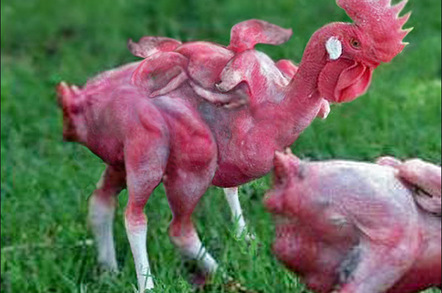 Shanxi Weilukuang Technology Company, Taiyuan Zero Point Technology, and Yingchenanzhi Success and Culture Communication stand accused of disseminating this and other damaging claims about the fried chicken giant's food, according to the BBC.

The eight-legged chicken story was allegedly disseminated through the WeChat app, and subsequently widely shared.

The big rooster at KFC China, president Qu Cuirong, said: "This not only seriously misled consumers, but also hurt our brand." The company is seeking $242,000 in compensation.

Regarding the scientific plausibility of producing multi-limbed poultry, KFC's Chinese tentacle said in a statement (Chinese): "If there were such a chicken, KFC would certainly apply for the Nobel Prize for Biology", and it would also prove that life really does imitate art.

In fact, the genetically modified polymelious chicken story is not specific to China. This entertaining report alleges that Kentucky Fried Chicken was obliged to shorten its name to KFC because it was no longer throwing real chickens into the frier.

Rather, the story goes, the company has developed mutant, tube-fed creatures with "no beaks, no feathers and no feet", but "multiple legs and wings on one 'chicken'". The economic advantages are obvious.

Preposterous they may be, but the claims could hit KFC hard in China, where it boasted 4,828 outlets at the end of 2014, topping even the 4,370 in the United States. ®