Fish boffins: Big-brain babes are brilliant, but benefit for boys is bijou 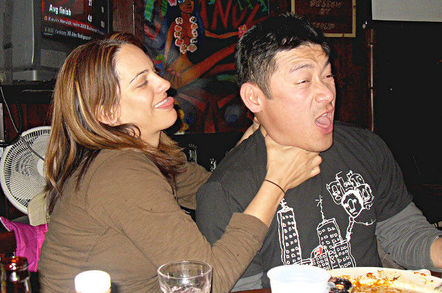 Aquatic boffins have discovered that increased brain size is only of benefit to female fish and not to males.

In a rigorous experiment, the scientists constructed a watery Colosseum for guppies to fight it out against their natural predator, the pike cichlid.

Larger brains are typically expected to provide animals with improved cognitive performance, but whether such an advantage provided enough of an evolutionary advantage to compensate for the expense such an organ required to develop and maintain it was unknown.

To study whether larger brain sizes correlated with a higher survival potential for creatures introduced to a threat, scientists from the the Konrad Lorenz Institute of Ethology at the Vetmeduni Vienna created a miniature fighting pit – actually a stream – which was designed to test how brain size affected survival.

In a study published in Ecology Letters, with the punchline-thieving title Brain size affects female but not male survival under predation threat, the boffins reveal a sexual discrepancy in how brain size affects the guppies' ability to survive predation.

Alexander Kotrschal, Sarah Zala, Séverine Büchel and Dustin Penn from the Institute found that large-brained females – those with brains about 12 per cent larger than that of their smaller-brained kin – evaded their predators more often and so had a higher rate of survival. As you might expect.

Timeline of the experimental procedure to determine the relationship between brain size and survival in guppies. The small black arrows indicate whole-population censuses, the grey arrow indicates introduction of the guppy predator, a pike cichlid. The weekly censuses stopped after a predeﬁned 50 per cent survival criterion was met at week 20

However, this survival benefit was surprisingly not present in their tests of male guppies.

The abstract to the boffin's study acknowledges there to be "remarkable diversity in brain size among vertebrates, but surprisingly little is known about how ecological species interactions impact the evolution of brain size. Using guppies, artificially selected for large and small brains, we determined how brain size affects survival under predation threat in a naturalistic environment".

Having "cohoused" mixed groups of small and large-brained individuals in six semi-natural streams with their natural predator, the boffins monitored survival like giddy emperors with weekly censuses over 5 months.

Drawing somewhat contradictory conclusions from this event, the boffins suggest that "large-brained females have a cognitive advantage that allows them to better evade predation, whereas large-brained males are more colourful, which may counteract any potential benefits of brain size".

The study suggests that alongside their nifty noggins, the large-brained males in these selection lines were co-selected to be more more colourful than the small-brained males. This, they suggest, was not coincidence, but likely due to a genetic correlation between brain size and colouration. Therefore, their increased conspicuousness to predators may have overridden the benefits of having a larger brain.

The study provides the first experimental evidence that trophic interactions – interactions between predators and prey – can affect the evolution of brain size.

The boffins are keen to note that they are not actually some latter-day Caligulas, and the breeding and marking of experimental ﬁsh complied with the law in Swedish, where it seems the guppies were bred. Animal care procedures during the predation experiment were discussed and approved by the Veterinary University of Vienna’s institutional ethics committee in accordance with good scientiﬁc practice guidelines and national legislation. ®